Nyamewaa > Politics > In praise of the ‘new’ Nigeria 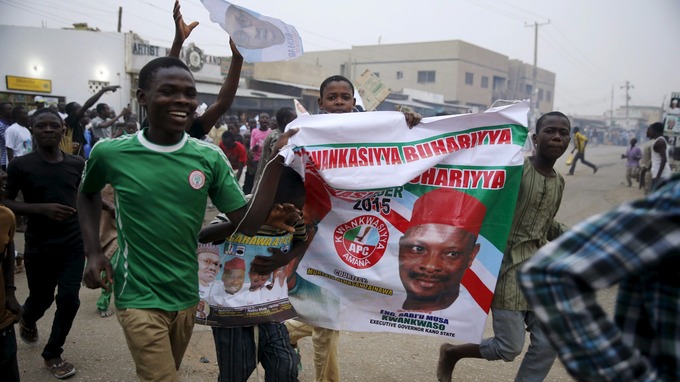 In praise of the ‘new’ Nigeria

Nigerians have done us proud. They have had an impossible time under the Jonathan government. The country has endured an insurgency from Boko Haram in the North, high rates of youth unemployment, frightening levels of corruption, growing poverty and a weak economy.

This was a real test for the country’s democracy.

IT IS significant because it is the first time in 16 years, Nigerians have voted out an elected government without any drama. The last time an incumbent lost an election in Nigeria was 1992. The Military which was in power annulled MKO Abiola’s win. Rigging, vote-buying and violence have plagued Nigerian elections since then.

The March 28 elections was not without the usual challenges that characterize African elections. Nonetheless, something special happened in this election.

Jonathan did something that is rare on the continent, he called to congratulate Buhari on his surprising win before the final results. Nigerians are thrilled. With this single act, Jonathan has saved us weeks of drama and possible violence.

This is how it should always be. I am so excited and impressed by how Nigerians conducted themselves during and after the polls. So much was said and written about the elections and the possibility of post-election violence. It all came to nought under the watch of the indefatigable Attahiru Jega.

HE saved all of us from the spotlight of the western media. We must commend the Independent National Electoral Commission (INEC) especially the Commissioner for a superb job in spite of the challenges.

When a former minister stormed the collation center on Tuesday with wild allegations, Commissioner Attahiru Jega remained decisive and delivered a result that shows the will of the people.

For us in Ghana, this was special because we’ve been wanting Nigeria to get it right for so long. Ghana is a second home to thousands of Nigerians as is Nigeria for many Ghanaians.

We don’t always get along. Nigeria is like that rebellious older brother you hate to love because he sometimes bullies you, and takes your stuff without your permission. Despite our love-hate relationship and our bitter quarrels over football and jollof, we care about Nigeria.

We trade among ourselves. The arrival of Nigerian banks transformed our banking sector. They contribute so much to the growth of our economy and national development.

It is obvious, when Nigeria does well, we do well. So will the rest of the continent.

Africa has been waiting for this moment from the most populous country and biggest economy on the continent for so long. And as Nigeria usually does, it has delivered with panache.

I am glad they did not disappoint. Scratch that, I’m delighted that they left analysts confused with the voting pattern. They refused to be defined by the ethnic, religious, and partisan lines.

Everyone played their part in moving Nigeria’s democracy ahead. . Everyone – Jonathan Buhari, Jega and ordinary Nigerians who queued to vote and then policed the vote till the final result was received – help carve this new path.

I’m thankful for the shift. Never again will incompetent, corrupt and weak leaders sit comfortably. I hope Nigerians remain engaged after the elections. As we have recently learned in Ghana, staying engaged with the system is the only way citizens can get the development and leadership they deserve.