Nyamewaa > Politics > Bawumia falls on his own sword 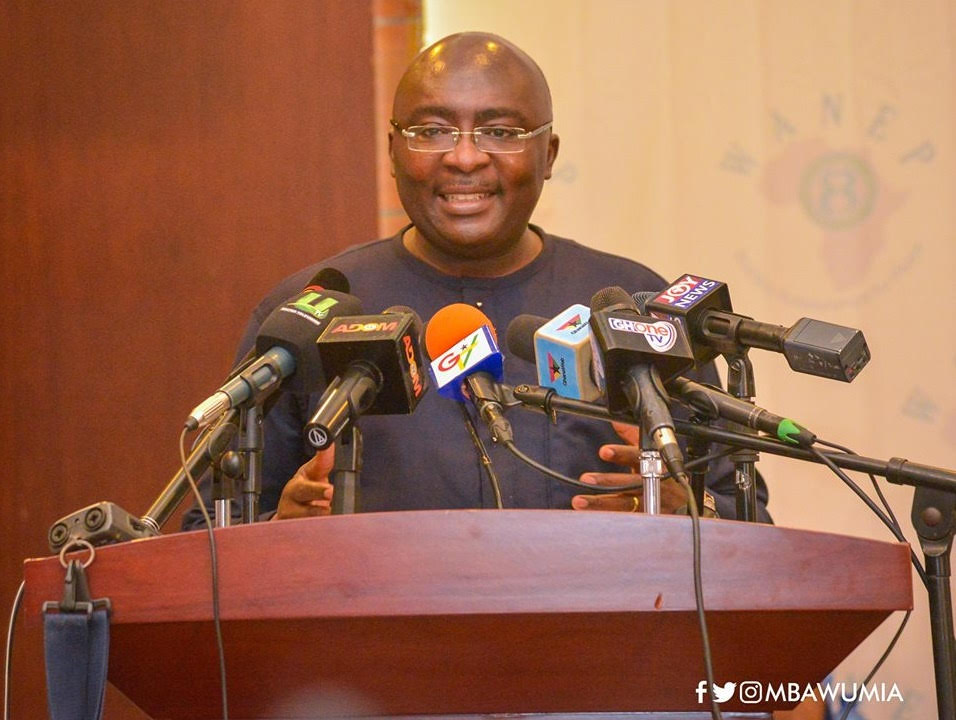 As you read this, the Ghana Cedi has become fairly stable. The Cedi had been falling against major trading currencies such as the dollar since February 2019. As of March 15, it had depreciated by 8.4 percent against the dollar. A $750 million Standard Bank Bridge loan facility halted the decline. It hasn’t recovered fully but it looks like the fast depreciation that made Ghanaians anxious has stopped – for now. And for that, the government and supporters of the governing New Patriotic Party (NPP) have been patting themselves on the back. Even the Ministry of Finance threw a Kenkey party to celebrate.

Barely a day after the cedi made some gains, the government announced an Economic Management Team town hall meeting under the theme “Our progress, our status, our future.” The Vice President, Dr. Mahamudu Bawumia, will be the keynote speaker at this meeting. A lot of crazy things have happened under the Akufo-Addo government—nothing will match the absurdity of a president traveling to raise funds to build a cathedral—but this is low.  Anyone who has lived in Ghana long enough knows that the cedi has two depreciating cycles—the first one occurs in February/March and the next in September/October.

These are the periods when importers are buying goods for Easter and Christmas and paying old debts. Almost everything that is consumed and used in Ghana is imported. Ghana imported $13.2 billion worth of goods with the top import being cars, rice, and fish in 2017. These are also the periods when foreign companies in Ghana repatriate dividends to shareholders abroad. The problem with the cedi lies within the structure of the economy: When you’re buying everything from toothpicks to toilet roll and not exporting as much, you are going to experience foreign exchange shortfalls.

This, of course, is a basic analysis of the problem, but my point is that everyone knows that the current appreciation of the cedi is temporary. Politicians know that injecting cash into the economy isn’t a sustainable way of dealing with the problem. As the business blogger, Jerome Kuseh explained to me, “borrowing dollars to pump into the economy only has a temporary positive effect on the currency and could have a long-term negative effect because you’ll need to find the dollars to pay back that money.” These were the same strategies Dr. Bawumia tormented the opposition National Democratic Congress (NDC) over during the 2016 campaign.

The only scenario under which it will be appropriate for the vice president to give a speech about the economy is if Dr. Bawumia will be apologising for the government’s spectacular underperformance. The town hall meeting is as useless as that bipartisan committee the finance minister intends to set up to investigate the problems facing the Cedi.  Imagine shouting, “we have the men” from the top of the hills only to show up and establish a committee to investigate problems first year students can identify and provide solutions from economics 101 notes. Isn’t that the kind of deep thinking political parties are supposed to do in opposition? The meaningless theme of the town hall meeting is perhaps proof that not much thinking was done about this idea because we have been on this path before.

When we met Dr. Bawumia in 2008, he was a nerd who didn’t seem ready for Ghana’s anti-intellectual political environment. But by 2012, he had evolved into a politically savvy man who made economics and knowledge cool on the campaign platform. By the time 2016 rolled around, he was one of the few people who had the ears of Ghanaians. His speeches in which he highlighted the failings of the Mahama government were wildly popular with Ghanaians ahead of the 2016 elections. It set him apart from his peers on the campaign trail. It wouldn’t be a stretch to say Dr. Bawumia’s credibility won the 2016 elections for NPP but I know how his party hates facing facts.

Aside from giving speeches and representing presidents at events, vice presidents don’t do much. Until Dr. Bawumia drew our attention to the constitutional mandate, they were seldom held accountable for anything, not even the failings of the government in which they served. That is why John Mahama was able to leap over the Mills administration’s mess to win an election. The Akufo-Addo-Bawumia ticket was supposed to be the one, the winning ticket. Here was a worldly older man with tons of political experience and the brilliant younger man who understood the economy. They were going to transform Ghana. This was the promise of the ticket.

Turns out the NPP was ruinously unprepared for the transformation it promised. The zeal with which party leaders promised to fight corruption disappeared soon as they got into office. Over the last two years, only about 10 officials from the previous government have been put before the court for misappropriation of public funds. It took a public dragging by the Special Prosecutor for the government to hasten the institution of a legislative instrument to back his office.  It’s not just corruption the Akufo-Addo government has failed to tackle. Accra is still “filthy, lawless, and chaotic.” As things stand, the president’s promise to make Accra the cleanest city in Africa in four years won’t happen.

There is a whole essay to be written about Dr. Bawumia’s boss who promised the moon and delivered so little. None of this is also to say the NPP hasn’t done anything worthy, but Dr. Bawumia cannot be giving speeches about the economy when it is still floundering. When the NPP took office in 2017, the cedi was GHC4.4 to the dollar. As of March 29, 2019, it was GHC5.3. The slide may have slowed, but it’s not gone. The speeches were cool in opposition when we were desperately looking for ideas. It’s not hard to see why the economy is the hill Dr. Bawumia has chosen to die on, he didn’t just taunt the NDC but also harassed Amissah-Arthur to answer his 170 questions on the economy.

If history is a guide, Dr. Bawumia will do what he did during the 2016 election campaign and the NPP’s first 100 days in office. He will mount the podium on April 3, 2019, at the town hall meeting and brag and tell us that the rate of depreciation of the cedi has been better under the NPP than it was under the NDC. He will list the so-called success of the Eurobond and the IMF exit as evidence of investor confidence in the economy. But all the bragging will only undermine his already-diminished credibility because the cedi isn’t out of the woods yet. It will probably never be, at least not until we address the deep structural economic problems within our control.

Like all parties attached to neoliberal ideas, NPP believes it can distribute wealth equally to the masses by “liberating the individual’s entrepreneurial freedoms” through a strong private sector, free markets and free trade. For them, the state exists to create what Ghanaian politicians love to call “an enabling environment” for “private sector-led growth.” But these are the very policies that have resulted in high unemployment, underemployment, poor access to health, education, water and more.

To get Ghana out of the current bind, the NPP will have to consider and implement alternative economic policies, like the ones that transformed Singapore, Malaysia and South Korea. Basically, dumping property-owning democracy is the only way to fix the economy and by extension, the cedi.  But since NPP is attached to its neoliberal policies, we’re stuck. The only thing predictable here is the disgrace that will come upon Dr Bawumia when the cedi starts falling again.