Nyamewaa > Politics - Society > Why is the Ghanaian Christian God so cruel? 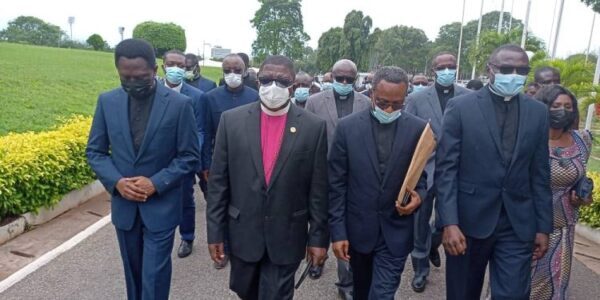 As a rule, I avoid all Ghanaian religious spaces if I can. I am a Christian, but I quit the Church for various reasons, some of which are stated here. I make exceptions for weddings and funerals, but I avoid the sermons even then. But two years ago, I stumbled on a sermon from a prominent Ghanaian pastor on Facebook, and I clicked play. Partly because I was bored and looking to distract myself from depressing Covid-19 news, and partly because I was surprised to see it from the person who shared it.

It was one of those early morning radio worship programs, and the preacher was talking about the pandemic. He said that Covid-19 was “a warning from God” and that even though scientists may tell us about the disease, the “true outcome” is the decree of the watchers. According to him, “we cannot just listen to what scientists and the media are saying, which is facts, but it’s not the truth.” The preacher also said there would be another crisis after Covid-19, which would be more painful than Covid-19, and “God will allow it to turn men to himself.”

I contemplated not naming the preacher in this piece because I’m not interested in debating followers of men. He is not the only purveyor of this notion of the vengeful God in Ghana. But it is important to name names to have an honest conversation. So the preacher was Archbishop Duncan Williams, and the sermon can be found here. At the beginning of the pandemic, he declared that no Ghanaian would die of the illness (Ghana has now recorded over 50000 cases with 1343 deaths.) It was staggering to hear him suggest that God had killed thousands of people to “draw people to himself” when the world was reeling from a pandemic predicted by scientists. But his claim that the God who had killed thousands, including the Italians (the people on whose land the bones of St. Peter rests), was not surprising to me.

The Ghanaian Christian God has always been cruel, demanding, and utterly bereft of grace. We are taught that he inflicts painful things, such as disease, famine, road accidents, even poverty, not just on those who do not know or fear Him but also on believers who stray. Sermons like the Archbishop’s tell us that sometimes God does inflict pain to test our faith. This God makes the cruelest God in Kumawood films seem merciful (not that I believe our indigenous religious practices are what ignorant filmmakers portray).

But the “fire and brimstone” God is inconsistent with all the claims Ghanaian Christians make about the biblical God and everything the text tells us about Him. (I say this knowing that the Old Testament God seems like a vengeful God at first glance. ) But Ghanaian Christians maintain that they are New Testament Christians who no longer live under the law but under grace because of Jesus’ ministry. The essence of that ministry, we are told, is liberation. Jesus’ revelation is supposed to guarantee all humans boundless love, mercy, and grace from God. We also know that as problematic as parts of the bible are, there are ways of reading and interpreting it that are not rooted in colonial, racist frameworks which dehumanize people and justify violence and exploitation. Postcolonial, liberation, and feminist interpretations present a just and loving God and offer believers more freedom.

Which begs the question: Why do Ghanaian preachers continue to weaponize this vicious God? The answer lies partly in the Prosperity Gospel — a fervent, racist, anti-intellectual, capitalist brand of theology popularized by American Evangelical Christians — and now the bedrock of Ghanaian Christianity. Proponents believe that wealth and health are a sign of God’s blessing in the lives of people He loves. Thus, to survive life on earth and escape God’s violence, one must become one of His favorites. One must (1) show deep, abiding fear of Him and (2) give money and other resources to God’s work to be one of the favorites. Here, God works the same way the money doublers Ghanaian Christians resent work. The money will bring healing to the sick, wealth to the poor, jobs for the unemployed, and happiness to marriages.

Ghana is a developing country with huge infrastructural deficits, high levels of poverty, and unemployment. In 2018, the UN Rapporteur for Poverty found that inequality was higher in Ghana than ever. It makes sense that Ghanaian Christians have embraced this theology. It explains why younger Ghanaians are more religious than the older generation. Understandably, this theology has flourished in communities where deprivation and suffering abound — for both the gullible and the desperate will do anything for relief. (And some need God to justify their wealth.)

The proponents of this theology are some of the wealthiest people on earth. Ghanaian prosperity merchants like the Archbishop drive expensive cars and own million-dollar homes in the best parts of town. In addition to their material wealth, they have full access to the ruling political class, influencing the public sphere. None of these ‘blessings’ would have been possible without the deep belief that God is responsible for all that ails earth and humans — poverty, wars, accidents, and famine.

Therefore, it is in their interest to teach people to buy the concept of a cruel God, for when people are terrified, they will not hesitate to buy Pastor Mensa Otabil’s dollar-priced miracles. I do not know enough to know if those who do not receive their blessings after years of giving and prayers feel scammed. But I know enough to know that the dominance of Christianity in Ghana means this theology has implications for everyone who lives here, even those who do not believe in the biblical God. For example, Christian leaders have been at the forefront of a violent campaign against sexual and gender minorities in Ghana over the past few months. Together with other religious groups, they campaigned for the closure of the LGBTQI center, claiming that gay people “are an abomination” to God. In 2019, they rallied against implementing a comprehensive sexuality education curriculum in schools claiming it was a Western ploy to spread LGBTQI attitudes in the country. (The irony is that American evangelical Christian groups are funding and promoting this bill.)

Currently, a Parliamentary sub-committee is reviewing an anti-gay bill sponsored by a bipartisan group of MPs. The bill seeks to criminalize every facet of queer existence, including sympathy, a natural human instinct from allies. Yet, pastors have called on Ghanaians to “pray for a successful passage.” They have threatened to campaign against members of parliament and elected officials who fail to support and vote for the bill.  Church leaders have organized prayer meetings and press conferences denouncing homosexuality. The Church of Pentecost collected fifteen thousand signatures supporting the anti-gay bill. To be fair, the Church is not the only institution hounding sexual and gender minorities in Ghana. Traditional and other religious leaders have thrown their support behind this bill.

Yet they have never held a press conference to condemn the rape crisis in Ghana or domestic violence or marched against corruption. At least 12 women have been killed by their partners since the recent wave of homophobia began. Sure, Christian leaders condemn corruption now and then, but they have never deployed the same energy they summon to incite hatred against LGBTQI people. They rarely raise their voices about the appalling health and education systems. Over five hundred thousand teenage girls have gotten pregnant in the last five years alone. When people die avoidable deaths in road accidents, their refrain is, “it is God who gives, and it is He who takes.” Neither the clergy nor their members strain themselves about inequality and injustices the marginalized face because “God helps those who help themselves.” But biblical scholars have provided evidence to show that the Prosperity Gospel is based on a faulty interpretation of the scripture. Theologians tell us that any theology that does not affirm all human lives as sacred is terrible. Throughout the Gospel, we see Jesus trouble religious and political structures on behalf of the marginalized.

But whenever the Church’s silence over systemic inequalities and harms is raised, we are told it does its best for Ghanaians. And many churches offer important services in healthcare, education, and finance, among others. But church-based social service is not the solution to structural and systemic challenges. For instance, the Church of Pentecost’s decision to build police stations and prisons may help ease congestion in selected areas. But they would not address the underlying problems of over-sentencing of poor people, poor legal representation, educational and job opportunities for people who need them.

It’s not hard to see why instead of outrage over the state of affairs, the church leaders give unfettered access to politicians and businesspeople whose actions and inactions harm Ghanaians. It serves preachers for Ghanaian Christians to depend on the Divine, instead of governments, for public goods . The desperation is what keeps churches teeming with people and offertory bowls brimful with cash. In short, the Ghanaian preachers need the concept of a cruel God to survive; hence, the destructive theologies on poverty, gender, and sexuality. But If all the Ghanaian Christian God can do is terrorize people into believing in Him and giving to his cause, it is time to get rid of Him. Or, as James Baldwin put it, “if the concept of God has any validity or any use, it can only make us larger, freer, and more loving. If God cannot do this, then it is time we got rid of Him.”