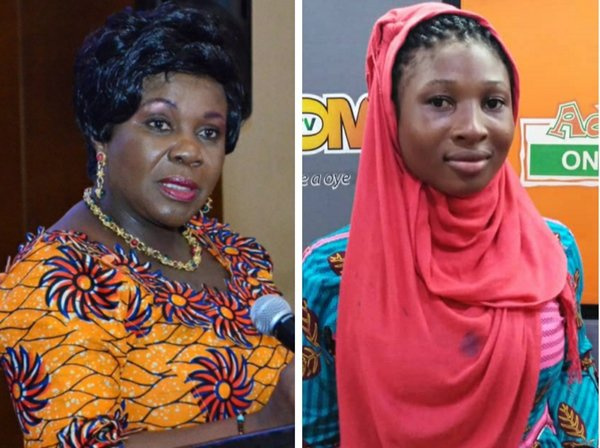 I wasn’t going to say anything about the intern-politician drama because I’m done with women in politics. (An essay for another day.) But I’m uncomfortable with the way this argument is going.

First, it was arrogant of the minister to speak the way she did to both the intern and the editor. She could’ve made her point without making it seem like she was above them. Let me be clear, interns deserve an opportunity to shine, and to show that they too can do the job. There is nothing wrong with an intern interviewing a minister or any other high-ranking member of this society. How are interns going to learn if they don’t practice and make mistakes? The Sanitation Minister’s tone exemplifies the condescension journalists experience in dealing with the powerful in Ghana. She was wrong and completely out of line.

But let’s be honest, editors and media companies rarely send interns and service personnel to ministers and high-ranking officials alone. It’s not that they’re lesser beings, but because they often lack the capacity and the context to ask meaningful questions. I mean, aren’t editors picky in choosing which senior reporter to send to such interviews.

Isn’t that why they choose to send the best on the business desk to interview the finance minister and to particular events where certain top people are expected to be present? Granted when pressed, editors send interns to big interviews, and sometimes some interns take initiative to interview officials when they meet them on assignment. Even in situations where questions are written for new people, they fumble, which is what I suspect happened in this case, because I very much doubt the conversation started with Mrs. Dapaah asking Rahinatu, “What are you there?”

As all journalists know, the general etiquette for such calls is that the journalist introduces herself, states the purpose of the interview and then starts recording. Where is that part of the recording? If that doesn’t exist, then maybe that’s why Mrs. Dapaah flipped.

This also happens. Some journalists have been known to call people without introducing themselves and proceeding to ask questions, also without preparatory conversations. Ask anyone who has received calls from newsrooms before and they will tell you embarrassing stories.

Also, did Cecilia Dapaah know she was being recorded? I know power corrupts and bloats the ego but I find it strange that she will be so rude on record. But then again, there are so many rude people in government and elsewhere in Ghana with power who mistreat reporters. But If she didn’t know she was being recorded, then there are ethical questions to answer here. (I should state that I know sometimes we start recording before we tell people we’re recording just in case they say start talking right away.) But still, if she didn’t consent to this interview or agree to be recorded, then isn’t the publication of the exchange a breach of trust?

All editors, journalists, and producers and know that it’s a struggle getting interviews from the powerful in this society. Sometimes you beg, coerce and flatter to get a five-minute interview. Sometimes people hang up and refuse to talk us.  Others are downright rude like Mrs. Dapaah was but we often frame the refusals and rudeness as “the minister refused to speak to us.”

This is the first time a recording has been released to highlight some of our challenges with powerful people. Is this because Cecilia Dapaah is the first person to be rude to journalists? Seriously, what was the point of releasing the recording? Is the plan to release all the recordings of others hanging up on journalists?

Of course, Rahinatu did nothing wrong here but I wonder if both she and her editor caught the minister at a bad time? What if she was in the middle of something? What if she feeling particularly irritable at the time of the call? (which isn’t impossible given her ministry’s woes.) I haven’t encountered her so I cannot say if this is her usual behaviour but if it isn’t, then isn’t all of this a bit unfair?

All that said, we should remember that Mrs. Dapaah’s behaviour flows from our existing culture where Ghanaian powerful people are never questioned or challenged. They take offence at every question, criticism and comments that do not favour them. Ghanaian powerful people (politicians, chiefs, pastors, doctors and other connected people) are never wrong. They treat people they deem beneath them with disdain and disrespect. The practice of demeaning the less powerful, less connected in society cuts across the two major parties and institutions. Both NPP and NDC politicians condescend to Civil Society Organisations, journalists and citizens all the time. Recently an MP who was arrested for breaking road traffic regulation berated the police officer who stopped him and the journalist filming the incident. The Kade MP actually told the reporter that he broke the law in the national interest. Another who was who charged for a similar offence refused to show up in court. It seems everyone with a little bit of power wants to oppress someone below them.

As ministers and government appointees, they dominate their agencies. They take over the work of civil servants, often becoming the only people who speak about the agencies work in the media. The political structure and bureaucracy in the public service mean civil servants cannot give information or respond to basic media queries freely. Those who dare have found themselves condemned to the Siberia, so journalists have no choice but to call up ministers and officials over ‘basic’ issues. If information was available as it should, an intern would have found it on a website.

Again, Mrs. Dapaah’s behaviour isn’t any different from how some of those criticizing her treat their domestic workers, drivers and employees. Perhaps, as we rebuke Cecilia Dapaah for her rude behaviour, we should discuss how we’ve created demi-gods in our society and made it impossible to hold the powerful accountable. We should also discuss our authoritarian political culture where politicians do and say as they please, because citizens allow them to get away with it. Maybe it is time we established new norms of accountability and respect.

Politicians working as ministers and as heads of state agencies can start by making information on their agencies accessible and available at all times. They should let officials working on various projects and departments answer simple media queries so that journalists will only come to them for clarification on major issues. But if they keep hogging the public square, they shouldn’t be surprised when they get calls from interns and juniors.

Anywho, Madam Dapaah’s outburst has nothing to do with her being a woman. Any journalist who has encountered male politicians know they’re the most arrogant group. We can talk about a woman’s bad behaviour without being sexist. It’s not that hard if you try.