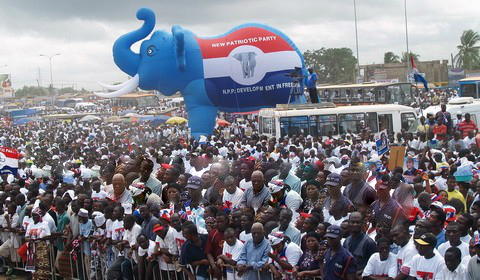 Let’s talk about the New Patriotic Party, (NPP) Ghana’s largest opposition party. Depending on whose narrative, one reads or listens to, it has already lost election 2016. The party suspended its National Chairman, Paul Afoko on Friday for reasons still unclear to outsiders. (Insiders insist Mr. Afoko has been compromised and won’t provide proof). And oh, he doesn’t call meetings.

This single act has once again exposed the deep, deep cracks within the NPP. Mr. Afoko has issued a statement insisting that he is still the national chairman of the party.
The party’s presidential candidate, Nana Akufo-Addo has called for calm and for supporters to allow party structures to work. Some party scholars have written articles suggesting that the NPP is doing all it can to “snatch defeat from the jaws of victory.”

Arthur Kennedy, the party’s prolific letter writer in a new missive said the act portrays the party as “inhospitable to non-Akans.” Dr. Wereko Brobby, a founding member on suspension described it as a coup. Naturally, officials and members of the governing National Democratic Congress (NDC) are celebrating the chaos.
NDC and insider shenanigans aside, this oddly timed decision raises some real and hard questions about the state and the leadership of the NPP.

So was Afoko suspended because of his ethnic group?

Nope! We can say the decision was poorly timed and probably ill-thought. Because, really, who wants to see the largest opposition party attacking itself instead of the government? We can agree with those who believe the NEC has been unfair to Mr. Afoko. We can even say the reasons for his suspension are ridiculous – because not holding meetings isn’t a such a terrible offense. We can say anything but we cannot use that tired, laughable, and silly label. Dr. Wereko Brobby whose uncle the party reveres is still on suspension. The NPP has at times been inhospitable to Dr. Arthur Kennedy, who is a Fanti. Surely, he can see when a suspension is just what it is, a suspension.

Is the NPP split?

Obviously. If it wasn’t we wouldn’t have supposedly loyal members of the party lining up to wash their dirty laundry in public. What no one in the party wants to admit is that, this division is between former president, John Kufour and the current flagbearer, Nana Akufo Addo. Reports say Mr. Kufour and his group, former health minister, Richard Anane and Chief of Staff, Kojo Mpiani just do not want Nana Addo to be president. That is why the party has been struggling to rally behind the flagbearer since 2008.

The seeming tension is a tussle between the two groups is for the soul of the party and if you believe a former Kufour press secretary Andy Awuni it is also about who controls the resources of the party.It gets murkier, it is unclear whether the group simply dislikes Nana Addo or it’s really the Asante/Akyem power struggle being revived. It might not be a huge split, Nana Addo’s influence is growing while Kufour’s waning. It maybe 97 percent against three percent, but the three percent wield a lot of power and influence.

A little background. After the many coups that followed the overthrow of the Busia government in 1972, an election was called in 1979. Six parties contested – but the two main contenders were Hilla Limann’s Peoples National Party (PNP) and Victor Owusu’s Popular Front Party (PFP). Everything written about that campaign and election suggests, the PFP, which came out of Busia’s Propress Party (PP) was supposed to win – the military regime had failed to restore the economy, unemployment was high, professional bodies were unhappy, things were bad but they lost.

Analysts, believe one of the reasons for the humiliating defeat was the intense bickering that led to a real split. One side was led by William Ofori-Atta (Paa Willie) who was a member of the Busia cabinet and the other, Victor Owusu. The NPP is an amalgamation of PFP and the UNC. It is also believed that certain members in the NPP never forgave Paa Willie(the Akyem- who was Nana Akufo Addo’s uncle) for breaking away with less than 10percent of the PP, thereby stifling Victor Owusu’s best shot at the presidency. Some even suspect all this chaos has been manufactured as pay back to deny Akuffo Addo what his people took away from Victor Owusu-the presidency.

Who is benefitting from the chaos

The NPP, like all political parties, has people who start, perpetuate and promote trouble and become the ultimate beneficiaries. So the existential question remains who are the beneficiaries of the current turbulence, certainly neither Akuffo Addo nor Paul Afoko are in anyway ultimate winners in this case. Axing Afoko is a blight on the dispute resolution capabilities of the party and by logical extension Nana Addo, and whichever way this goes Afoko has also been indicted as the only NPP chairman to have been suspended from his position.

While the NPP, the biggest opposition party in Ghana has been self-destructing, the Minister of Finance just announced that it may issue a fresh Eurobond of up to $500 million by year end, if market conditions are right. This is after the government launched a $1 billion Eurobond at a 10.75 percent coupon rate on October 7, after having initially targeted a $1.5 billion bond at 9.5 per cent.

It’s 14 months to election 2016, an opposition party ready to govern would be presenting policy alternatives, challenging and questioning government policies and decisions. To be fair, the flag bearer and his vice have been campaigning fervently. But somehow, it’s the bickering that makes the news. Frankly the noise makers reek of greed – this is about saving Ghana or making it better. This is about who gets closer to the feeding trough.

Has the NPP been infiltrated by NDC

It would be foolish of the NDC not to infiltrate the NPP and knock heads together. It is in the interest of the NDC that NPP self destructs so if shaping the narrative is what will do the trick, it will go all the way. They will keep harping on the party being an Akan party and shine light on the chaos. But who is the weakest link in the opposition party – those getting juicy contracts from the government, those on a payback vendetta or those acquiring oil blocks like tomatoes at the Mallam Atta Market.
Will the NPP survive this crisis

As I write this, three members of the party have gone to court on behalf of Mr. Afoko. The General Secretary, Kwabena Agyepong is said to have stormed out of a Steering Committee. Something that led to the destruction of his car by angry supporters.

It looks like the infighting is going to get messier before it gets better. But will the NPP find its way back? Will all the parties unite ahead of 2016? Maybe! This clash between party executives and the presidential candidate has happened before. The man Afoko succeeded, Jacob Obetsebi-Lamptey faced the Disciplinary Committee over party funds. Haruna Esseku was hurled before the party’s Disciplinary Committee in 2002 when he alleged donations were going to the presidency instead of the party office. He was subsequently suspended. John Kufour fought bitterly with then Chairman, Peter Ala Adjetey ahead of the 2000 elections. He cut the party leadership off and managed his campaign alone and went on to win that election. Nana Addo and his group can do same.

It was 2000, there was no social media and 24-hour news cycle to highlight the divisions. Ghanaians were not as politically aware as we are now. Ghanaians are desperately looking for a party that can mend the nation, but right now, the NPP doesn’t appear attractive.

The NPP is trouble! It is said a weak and compromised opposition is a huge threat to a developing democracy, we may not care about Afoko, Agyepong or Nana Addo but the earlier the NPP gets it together, the better it will be for all of us.