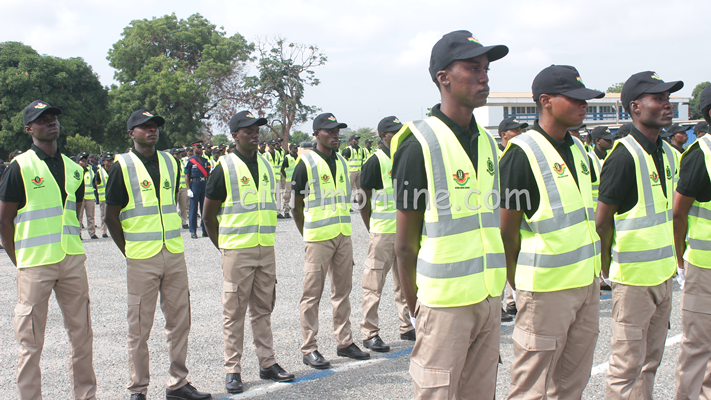 Last week, the Executive Director of the National Service Secretariat, (NSS) Michael Kpessa Whyte, commissioned 210 national service personnel who will be working as traffic wardens for the next one year.

The plan I’m told is to deploy as many as 1000 graduates under something that the NSS calls Urban Traffic Management module.

Under this module, Kpessa Whyte and the NSS intend to “revive the spirit of patriotism and love among the youth.”

This plan to achieve this magnificent feat, he said, was hatched because: “we have had in recent times, huge traffic congestion and we thought that the large numbers of our youth coming out of the tertiary institutions who are now going to traverse into the world of work are a pool of resource that could be used to ensure that we can bring some order, reduce the congestion on our roads and ensure that Ghanaian workers and commuters who are going to work have a hassle free morning and afternoon when they close from work.

This is also to revive the spirit of patriotism and love for country in our youth.”

The depths politicians will go to justify the unjustifiable is astounding. There are smarter and easier ways to revive patriotism and love for our country, Mr. Kpessa Whyte’s plan is not one of them. It’s flawed. It is a complete and a criminal waste of human resources.

Even with our semi-broken education system, these are some of our best brains, they should spend their year of serving Ghana transforming lives, not huddling on junctions like some people from a certain Police Visibility team.

I mean, what’s the sense in deploying graduates to direct traffic when they can work to improve the literacy rate in rural Ghana? Or work in district assemblies? Or serve as support staff in the health sector?

I’m in no way demeaning the traffic warden’s job. But there is a pool of unemployed, uneducated and untrained youth already doing this work in many communities, wouldn’t their love for Ghana be revived if they’re actually employed to do what they do for a few coins daily? We would be reducing unemployment among that group of the population.

And really, is this the solution to reducing the huge traffic congestion? It is interesting to note that Kpessa Whyte is championing this absurd module. Mr. Whyte, my digging has shown has a Ph.D. in Public Policy Management. He used to tout his competence in diagnosing the problem of the Ghanaian which he variously referred to as “Navigating Inefficiencies ” where he argues that instead of African governments developing and implementing policies to solve structural issues, they resort to short-term solutions which force citizens to navigate inefficiencies daily?

So I wonder what possessed him to decide that the best way to use higher education graduates is for them to direct traffic. Or how now sincerely believe that absence of traffic wardens is the cause of the congestion on our roads?

Isn’t it because of a lack of a proper, safe and efficient public transportation system?? Isn’t because we do not have enough roads and existing roads are in a terrible state? Isn’t because broken down vehicles are allowed to sit at intersections of the road for hours and days?

What in the world made someone with a Ph.D. in public policy management decide that directing traffic is a job for the graduate at this stage of our development?

It’s beyond puzzling because Mr. Kpessa Whyte once mocked the Kufuor government’s Youth in Driving module under the NYEP saying it was a waste of human resources.

I agree with him governments must tackle structural problems with well-thought-out policies. Sadly, this Urban Traffic Management Module is not one of those, and it should be scrapped immediately.