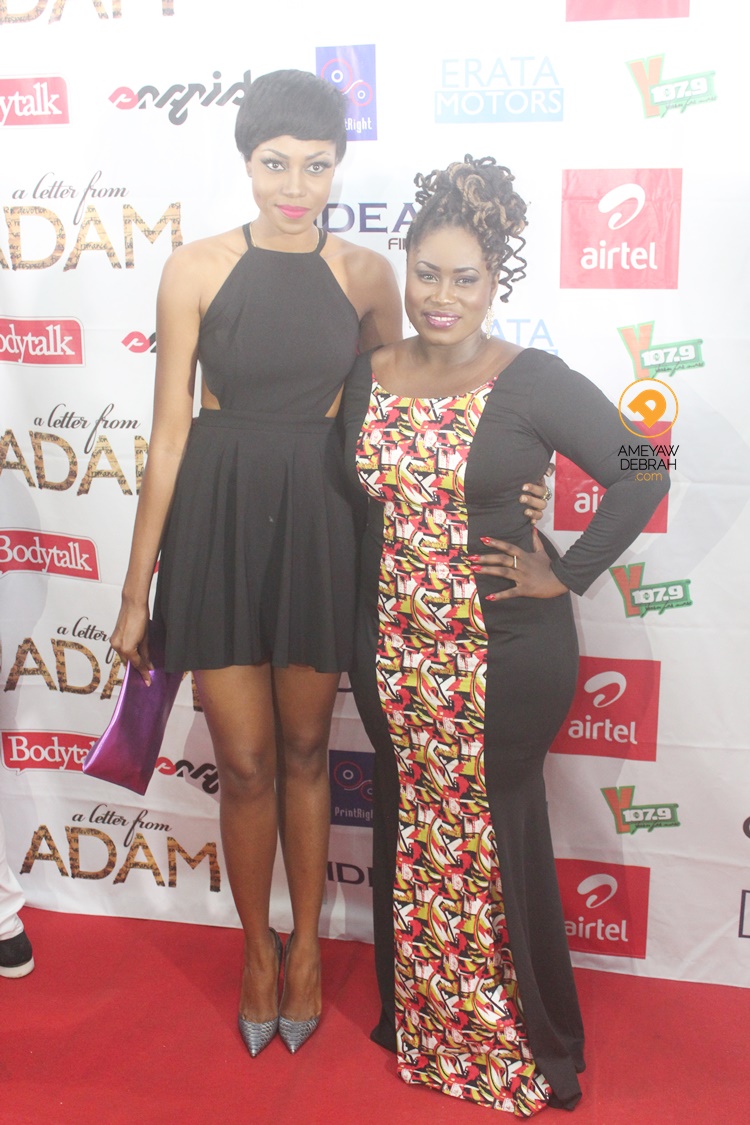 To be honest, I am not greatly surprised by the NDC foot-soldiers’ attacks on Lydia Forson and Yvonne Nelson. It is standard behavior for politicians everywhere. In Ghana, anyone who dares criticize government is fiercely attacked. Usually these days, anyone who dissents is accused of working for the New Patriotic Party. Preachers in this town have been asked to leave the pulpit for active politics because they criticized the president.

To those very comfortably affiliated with the governing party, everything the administration does is right. President John Mahama’s people are the worst. They will not tell him the truth and they will take offense (where there is usually none) and attack anyone who dares speaks the truth they cannot and will not tell the president. But to stoop to misogyny is a new low, even for them. A number of musicians and actresses took to social media on Friday to vent about the ongoing power crisis. Sarkodie did a song called “The Masses” to paint the horrible state of affairs. Lydia Forson wrote a letter asking the president to fix ‘dumsor’ like he promised. In a series of tweets, Yvonne Nelson got #dumsormuststop trending.

Not everyone is pleased. As usual, officials and foot-soldiers of the NDC swiftly took to social media to berate them. For the first time, they did not accuse the whole group of working for the NPP like they did to Occupy Ghana. They did not even aim for the men in the group either. They simply went for the women who spoke up. One Alhaji Halidu Haruna put up a post on Facebook calling Lydia Forson and Yvonne Nelson irresponsible prostitutes because they are both above 30 and single. 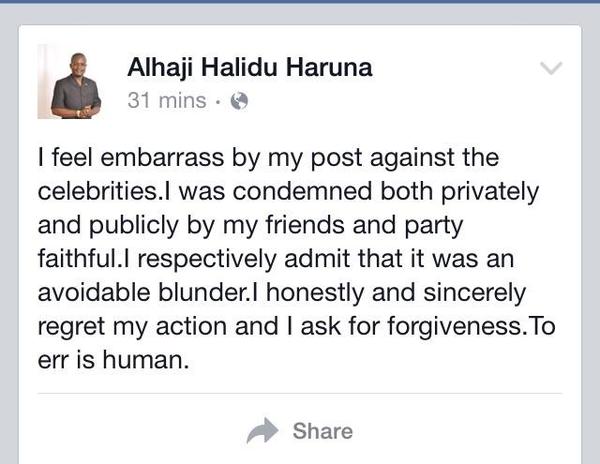 In another post on Facebook, Dela Coffie, a known supporter of the NDC, wrote: “I am not sure if this your frequent throwing of tantrums is a menopausal irritability or a midlife issue. Whatever it is, I am sure President Mahama is ready to take an advise on morality, but certainly not from a brothel.” This is cruel, disrespectful and unnecessary. I mean what has a woman’s sexuality got to do with her demand for a more reliable electricity supply.
There is a name for this kind of attacks on women. It is called slut-shaming. It is the act of disparaging a woman for her real or presumed sexual behavior. It is a powerful silencer. Women who are perceived to have deviated from patriarchal expectations of women are criticized until they leave the space humiliated. Immediately a woman speaks up, her right to speak is questioned before she is heard. Her right to speak is determined by her marital status as stated. If she is married, people will listen and treat her with some respect because she has a man. Single women, however, are taunted for being sluts unworthy of being heard.

That was the reasoning behind Halidu Haruna and Dala Coffie’s comments. According to their twisted logic, the only human beings worthy of ever criticizing the government are men (single and married) and married women. Every Ghanaian woman experiences some form of this silencing. Married women are told to dress and speak in a certain manner.
Single women are told to cover up and be submissive to avoid the label. An outspoken single woman is told to tone down to avoid the shaming. All women are told never to challenge or question a man’s word.

Married women are given some respect out of respect for their husbands, not because they are human beings. But even they do not escape the silencing, most men, knowing the abuse an assertive woman gets, prevent their wives from engaging in the public space.
If the husband is a progressive man (not that there are many around), foot-soldiers of patriarchy will force him to silence his wife – because people will only discuss her body parts. It is not for nothing that most activists and outspoken women are either single or divorced.

The other day, when I criticized the government’s action on Facebook, someone I went to university with wrote: “you think you have grown wings, were we not sleeping with you in school.” He must have been a useless fuck because I don’t remember sleeping with him. He didn’t care about the truth. He thought if he could portray me as ‘loose’ that will diminish the value of my words. On bleaching, this was the response. 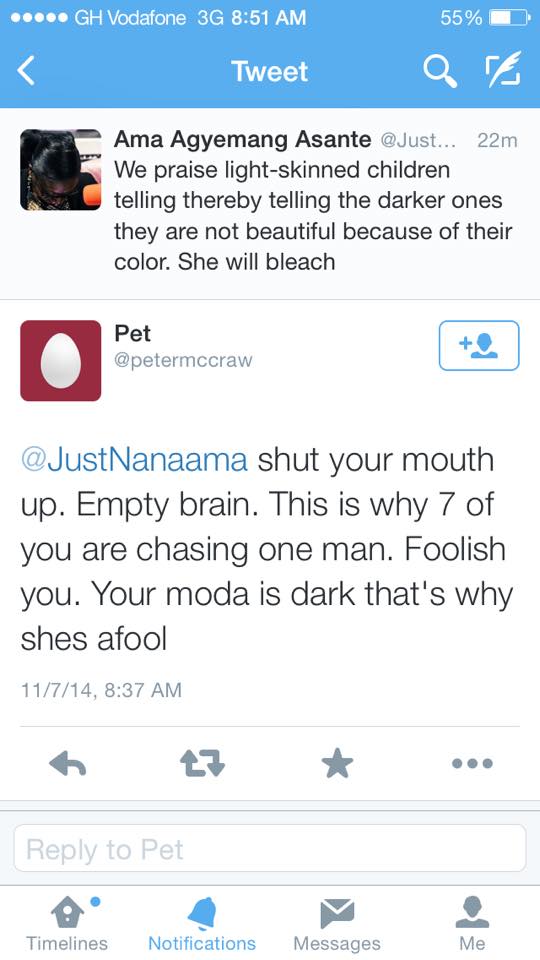 That is what the Informer Newspaper (a newspaper affiliated with governing NDC) did when it put the picture of business executive Brigitte Dzogbenuku on their front page with some nasty story about her marriage for participating in the Occupy Flagstaff House protest. Ghanaian actresses and women parliamentarians suffer the worst forms of this attack. The unmarried ones are taunted for their perceived sexual behavior. When the outspoken and successful ones speak, they are mocked for sleeping their way up. 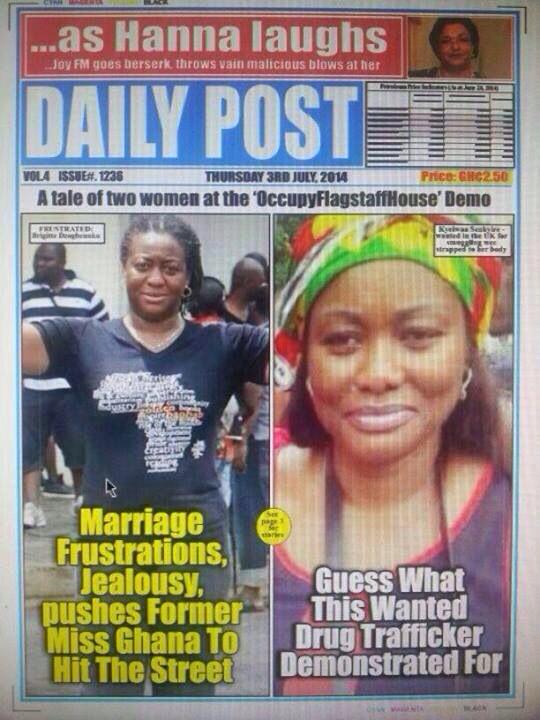 It is as if a woman cannot use her brain for anything other than please the powers that be. By pleasing, I mean, by remaining invisible and quiet. When men declare their respect for a well-known Ghanaian woman, it is often because she is not challenging the status quo. Alhaji Halidu Haruna has since apologized for his comments.

I’m glad he did. It is the honorable thing to do. I’m treating all the comments with the ‘out-of -the-abundance-of-the-heart’ measure. All the attacks on the actresses and other women are born out of the ingrained misogyny that exist in Ghanaian society.
Out of it comes the tolerances for sexism, rape jokes, fat and slut-shaming. I am sick of it. I’m sick of the never-ending dehumanization of Ghanaian women. The government is headed by a married man. Married men and men hold the majority of the key positions in government and other sectors of the economy. If being married added any extra value to one’s sense of responsibility, why are we in this mess?

It is dangerous to let it slide like Bani’s “stone cheating married women” comments because misogynist attacks like this, will keep more women out of the democratic space.
Women make up 51 percent of Ghana’s population, yet there are only 29 women in Parliament. The campaign to encourage more women to participate in the governance process has not yielded the needed results.

Many women are put off by the sexist and sometimes misogynist attacks women already in the space endure. Let’s face it, no human being (women included) wants to be shamed and dehumanized for her sexual choices. Women and girls are full human beings who have a right to participate in the democratic space. Marriage is not the ultimate achievement for women. Married women are not better than single women. Like men, women also have varied interests.

They have the same rights and privileges the laws of the land give men. So if men are listened to without anyone reducing the content of their argument to real or perceived sexual behavior, women must be accorded the same respect.Yvonne Nelson and Lydia Forson spoke about an energy crisis that is killing businesses and lives.If you are not so affected, you can engage them by stating what this amazing government has done to end dumsor.

When people (especially men) focus on the use of a woman’s vagina instead of her argument, they come off as weak insecure people who have nothing intelligent to say.
Truth is, if we were all going to base the value of people’s voices and contribution to the national conversation on their real or perceived slutiness, half the male talking heads will not make it. This is a place where monogamous men have pseudo-wives, mistresses and girlfriends. Married politicians have had babies while attending HIV/AIDS conferences. Seriously, is this measure we want to use?

The Public Sphere Isn't For Only Politicians

Unfiltered – 'The What Were They Thinking Edition'