Nyamewaa > Politics - Society > The Public Sphere Isn’t For Only Politicians 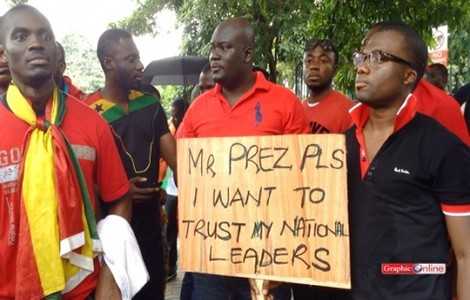 Not a week goes by in Ghana without some version of the mundane neutrality conversation being propounded. It often goes like this: an important person or group – someone, Ghanaians know is not aligned with any of the two main political parties – criticizes the government, officials of the party in power do all they can to discredit them by linking them to the opposition party.

The reasoning behind this tactic, I suppose, is that opposition parties always exaggerate the issues to their benefit. Also, if they are able to link a perceived non-aligned person to the opposition, they undermine their credibility.

Both the National Democratic Congress (NDC) and the New Patriotic Party (NPP) do this to crush critical voices and dissent.

When NPP was in power, IMANI Ghana, the Centre for Democratic Development (CDD), the Institute of Economic Affairs (IEA) and other CSOs were accused of working for the opposition – that was the NDC.

Recently, when the Moderator of the Presbyterian Church of Ghana criticized the government for mismanaging the economy, officials accused him of using the pulpit to do the work of the NPP. They asked him to get into active politics to engage the government.

Many preachers, including the beloved Mensa Otabil and the Methodist -Church Diocesan Bishop of Obuasi, Rt Rev. Stephen Richard Bosomtwi-Ayensu have received the same orders.

Last week, the Rapper, Sakodie and some celebrities including Yvonne Nelson came under attack over their planned vigil to protest against the power crisis.

The celebrities have been accused of doing the bidding of the NPP. NDC foot-soldiers are circulating pictures of Sarkodie with the NPP’s presidential candidate to back their claims.

Some of the attacks have come from some of their own colleagues. The former Comedian, David Oscar asked them to stop ‘whining’ about the energy crisis as the president was doing his best to end it.

Others say the group should stick to their core business – leave politics for politicians. The Minister of Power, Dr. Kwabena Donkor is one of those.

“As at now the artistic industry isn’t at an enviable level … I don’t see why they are trying to turn an artistic group into a political action group.”

How insulting. The Power Minister now wants the people in the creative industry to get to an enviable level before they can comment on national issues. As if, that can magically happen without effective management of the economy and constant power supply.

I don’t blame him. Having a generator in dumsor does amazing things to one’s emotional intelligence.

There has been an increase in inappropriate comments like that of Dr. Donkor from the NDC. President Mahama stepped into the fray last week with a post on twitter asking the people not to “spread the division” in Ghanaian politics to the creative industry.

This kind of thinking is extremely problematic and frightening. It appears the president and other top politicians believe the political space is reserved for active politicians.

It looks like the parties have an unwritten agreement between them to tolerate dissent from themselves, hence the resentment of dissent from anyone outside their imaginary circles.

I sincerely don’t understand our government’s obsession with neutrality. So what if Sarkodie and his people are working for NPP, does that reduce the legitimacy of their complaints? Isn’t the power crisis negatively affecting quality of life and cost of living?

There are no neutrals when it comes to politics. It’s impossible and quite a foolish ask. Everything is political. The filth in the Odaw river, the lack of footbridges on the N1, the dilapidated schools, the chaotic health-care system, open-defecation and the all the problems that impact our lives are political.

Preachers, musicians, playwrights, journalists, students and workers are Ghanaians; they cannot and must not be neutral. Jesus, who came to die for mankind, was never neutral. Remember when he went lashing people up in the temple? That was a political act.

When he debated and disagreed with the teachers of the law, that was politics. He saw the injustice and refused to accept the status quo. If we want to stretch, we could say even his death was political.

Bob Marley, one of the greatest reggae musicians who walked the earth was political. Most of his songs were political messages. He vehemently opposed the racism and exploitation of blacks and Africans. His song ‘War’ sums it all up – he wanted justice and equality. Throughout history, men (Ghandi, Mohammed, Martin Luther King, Lucky Dube) have used speeches, sermons, books, plays and songs to push for societal change.

This business of labeling critics of governments as partisan and proxies of the opposition needs to stop. It has kept the best of our human resource out of the political space. People who know better and should engage the government have withdrawn from the public debate. Politics is not reserved for elected officials, their friends and Stephen Atubiga – at least Aristotle was clear in his mind about that.

We won’t be idiots— yes, that is what those who cared less about the politics of their time were referenced in the Greek City states. Especially when it is pretty obvious that the philosopher kings are not the ones in active politics today.

Ghana is a democratic state and the right to dissent is a democratic right – even if it’s unintelligible gibberish. More importantly, democracy requires everyone to play their part – various arms of government, citizens, CSOs, and groups.

Dissenting is one of the ways citizens keep government in check and on track. It helps to shape government policy and decisions. Parties evolve and grow with criticism and scrutiny – the best policies are made when the government listens to its people. Dissent benefits everyone – the government and the governed.

People do not do it because they do not like the face or the head of the government (well, some might, but that’s no reason to suppress dissent). The president and his friends should know that self-censorship is a threat to the development of any democracy.

The celebrity dumsor vigil is a sign that Ghanaians got over the perception that the politics is reserved for a few lying tongues long ago. The president and his party people can engage, if they want to properly govern else, they should allow us to vent in peace.

After all the medieval expression underlying democracy states ‘what touches all ought to be considered and approved by all’.