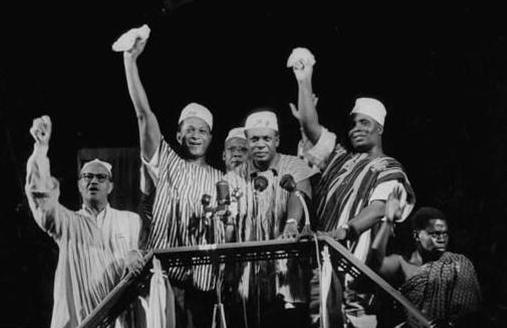 Dumsor takes your mind to the strangest places. I have spent my dumsor nights thinking about Ghana. I have been thinking – a lot – about the men who started the fight for Ghana’s Independence. I have been thinking about Nii Kwabena Bonne, members of the famous Big Six (the men who formed the first political party in the Gold Coast) and most especially Osagyefo Kwame Nkrumah. What would they make of Ghana?

I have been wondering what these men and unnamed women who started and fought for independence will think about the state of the nation. Will they be as heartbroken as many of the people I know? Will they be shocked to learn that after fifty-eight years, the International Monetary Fund has been invited to help stabilize the economy and reduce the fiscal deficit – or basically to police the government spending?

All I have heard, read and seen confirms that these men and women cared about Ghana. They may have vast differences about the route to independence, but they believed that an independent state would change the lives of Ghanaians. They knew Ghanaians deserved better than the colonialists were offering and they fought for it. They said when Kwame Nkrumah, the man who eventually became the country’s first president took over from the British, he did two things. He started massive infrastructure projects and a program to create a Ghanaian with what he described as the African personality and identity. Schools, factories, roads, and hospitals were built all over the country.

The Young Pioneers, a youth club was formed to shape the personality and identity of young Ghanaians. The nine years, Kwame Nkrumah was in-charge, Ghana became the coolest place to live. Everyone came here for inspiration and hope. Ghana was the place to be in the sixties. Everyone from Nelson Mandela to Martin Luther King came for inspiration and to see the wonderful works of the man. My dad who was just a boy and others who met and experienced him insist that people because Nkrumah was showing the world that the African was “capable of managing his own affairs.”
They say that was a great time to be Ghanaian.

Of course, not everything Nkrumah did was wise and brilliant. He did appalling things with that Preventive Detention Act. He got carried away with power and became a tyrant too early – declaring himself a life president true independence was unfortunate.
He did atrocious things we are too ashamed to discuss. He wasn’t perfect, but when he made Ghana the place to be. These days no one is coming to Ghana for hope and inspiration.

It all changed somewhere in the 70s, the country has been on a steady decline since then. The incompetence of the Mahama government has exposed the failings of all the other leaders we’ve had since the great man. Ghana is broken. Nothing works.
The school system, healthcare, housing, sanitation, manufacturing, and other sectors of the economy is struggling. The country has been undergoing an intense load-shedding exercise for the last three years – an energy crisis was caused by years of poor planning for the energy needs of Ghanaians by successive governments.

It is crippling the already weak economy. The cost of doing business in Ghana has gone up, some companies have had to lay off workers or shut down due to the energy crisis. Everything looks terrible fifty-eight years after Nkrumah said the black man was capable of managing his own affairs. There is evidence to show that he wasn’t wrong, but why haven’t we found anyone to top Nkrumah? Why are we breeding these visionless, purposeless leaders who think only in four corners?