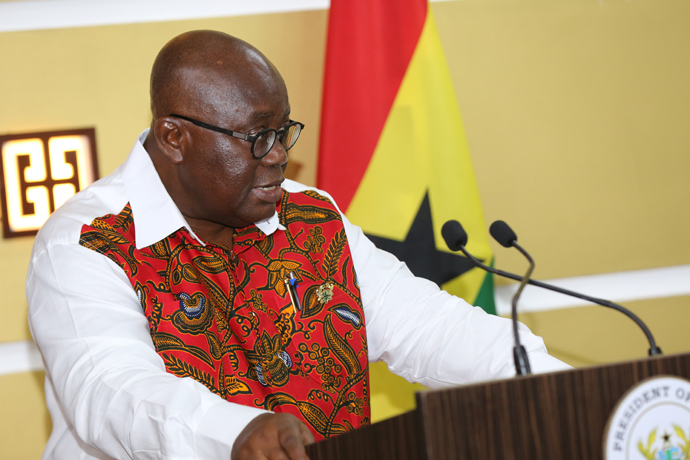 This letter is overdue. You’ve been doing a lot of things I never thought you would. But I have been exercising supreme restraint in the hopes that no matter what you do, you will not go down the path your predecessor walked. The path that left many of us in rage and wondering if there was something in the water at the Jubilee House that makes our presidents make the most obviously disgraceful decisions. Sure, you haven’t done anything as scandalous as airlifting money to pay the Black Stars yet or as careless as reassigning a minister indicted in a corruption scandal to the presidency. Oh, wait! You kind of did when you cleared all the officials indicted in A-Plus/BOST saga and the Australian visa scandal among others without conclusive investigations.

My point is you’ve been on a roll, making mistakes you swore never to make. That decision to demolish prime state properties to build a national cathedral is a testament. As I noted then not only is that decision inconsistent with your promise to protect the public purse, it is also a threat to national cohesion. But as disappointing as that decision was, it pales in comparison to what you did last week.

Immediately after Asamoah Gyan issued that whiny statement saying he didn’t want to be in the Black Stars if he wasn’t going to be the captain, you summoned the coach. You then called Gyan and urged him to rescind his decision. Apparently, all of this was based on “considerable national disquiet?” Was this alleged disquiet also from the section of Ghanaians at the presidency because there is no evidence of it anywhere – not on or offline?

Sir, even though we don’t know what you told the coach, Akwasi Appiah, the provisional squad list says it all. With that one move, you undermined the coach’s authority and paved the way for the usual tensions that often plays out on the field. With the greatest of respect sir, what were you and your advisors thinking? Of all the things happening in Ghana that require presidential attention this is what you chose to prioritize.

For months the families of the three girls kidnapped from Takoradi have been complaining about the investigative processes. Two weeks ago, the head of the Criminal Investigations  Department of the Police, COP Tiwaa Addo Danquah admitted lying to the public about the three Takoradi girls who have been kidnapped. Weeks before that she had told the entire nation that she and officials from the Bureau of National Investigations had located the girls and were working to rescue them.

It turned out her big announcement was a lie. Despite the tremendous implications of her actions on national security, public trust in the police and the CID, you haven’t winced. An actual incident which caused “considerable national disquiet” but you didn’t summon COP Addo-Danquah or her bosses. You haven’t even offered the families some comfort by way of a phone call but you had time to call an entitled, washed-out player over a non-issue.

In the past few weeks, a teacher was brutally beaten to death by former students at Asiakwa in the Eastern Region. A policeman was assaulted by a mob in Krokohwe near Amasaman over land. In Gushiegu, policemen were attacked by residents with machetes and clubs over cattle theft. Analysts have already established a trend and warned of escalation that could impact the country’s stability. You haven’t said a thing about any of it. Not even to the family of the teacher who brutally murdered. You could’ve have reassured teachers who often refuse postings outside cities that your government will make it safe for them to work.

Your silence on major national issues isn’t really shocking to me because while your peers assume responsibility for everything that happens in their countries, whenever you’re in the spotlight, it is to claim some glory. That is why you shared your grief to mourn over the Notre Dame fire when you hadn’t said a thing about the five people who died in the Accra floods. Remember that incident? You were literally shamed into commenting on the deaths. There was nothing when the banking crisis was unfolding.

When you finally spoke months later, it was to brag in Rwanda about the work done so far but there was nothing on the prosecution of the people whose actions and inaction triggered the collapse of the seven banks. When you finally commented on the Adenta protests, it was to berate citizens and to say the lack of footbridges for complaining. What a strange thing for a man who begged, cajoled and fought so hard to lead Ghana to say. Isn’t everything wrong in the country a legacy problem.

It appears you enjoy being seen as president more than doing the work. Which explains why you’re happiest when you’re off somewhere giving speeches and painting a country that doesn’t exist to outsiders. Your delight when giving speeches in fancy places and meeting important people is often palpable – like how you were glowing when Macron praised you when you met. If speeches alone could transform our country, we’d be glowing too. I often cringe when I see you go on as if our capital, the seat of your government isn’t smelly, and corruption isn’t endemic here. Don’t get me wrong, there is a lot to celebrate, and your government deserves commendation for implementing free SHS, stabilizing the economy and perhaps more.

But Sir, we had such high expectations because of the ambitious promises you made during the 2016 election campaign. Besides the transformative and ambitious policies, both you and the NPP told us you were a radical, no-nonsense man on whose watch the little annoyances we experienced under the Mahama government would disappear. We know transformation is impossible in two years but we thought you’d fix the small things – make it easy for Ghanaians to access ambulances when they need it or buy land without having to pay three times and then put up with the violence of landguards.

End the practice of people in V8s cutting through traffic with dispatch riders, along with rent advance nonsense and the wahala. We expected an Akufo-Addo government to free us from our abusive and corrupt police and make Ghana safe. After all, you’re an experienced politician, lawyer, and a worldly man looking to leave a mark in the sands of time. Turns out, you’re no radical. Neither are you the no-nonsense type. In fact, it appears you have a high tolerance threshold for foolishness, corruption and incompetence.

It pains me to write this letter and to say these things because as you know, in our culture we don’t tell our elders off by heart. I dread the reaction of your thin-skinned supporters who think loyalty must be blind to the leader’s failings, even the ones that harm the collective. But loyal service also means telling unpalatable truths. Perhaps if someone had been honest with you, you wouldn’t have prioritized the ego of an over pampered Black star player.

I suppose you were working with the old logic that suggests that if the Black Stars do well, the party in power does well. Considering the games won’t be played by people from one party alone, how do parties plan to convert an AFCON win into votes? Is it that you expect us to be so delirious with joy months after a great AFCON performance that we will forget all about the pervasive grand and petty corruption? Surely, you can’t think us so stupid to believe that we will forget and forgive all your faults if the Black Stars won the 2019 AFCON. Anyway, had your people done their job as well as expected, you would’ve known that Black Stars are no longer the local favourites, not since that 2014 World Cup debacle.

The reason so many worshipped that team is because there isn’t a lot for Ghanaians to derive joy, pride and identity from. You don’t see citizens of countries where investments are shared equitably showering all their love on one sport, do you? This intervention wouldn’t even be annoying if your government was investing massively in a broad range of sports. Recently the women’s relay team that qualified for the World Athletics Competition complained about the lack of support, no one was summoned. If we had more choices you wouldn’t need to bend over to do the bidding of Asamoah Gyan for a team that hasn’t even won anything in a long while. Actually, if you hunkered down and built a country where citizens live dignified and fulfilling lives, people could create things so we also have multiple sources to draw joy and pride because it works, you know, like how you Francophiles feel about your country

All I’m trying to say is that I never thought it was possible for you to match your predecessor’s capacity for stunningly poor decisions but here you are making rookie mistakes. It’s unbelievably depressing to see the mistakes you’ve made in the past two years after fighting so difficult to become Ghana’s president. Imagine fighting for twenty years only to come and pull the same old mediocre stunts the man before you did.

You have a year and some months, please, I urge you not to spend the time left majoring in minors. Time no dey, people are using 3D printing to produce human parts, we need jobs. And I hope for your sake and that of your elevated ‘general captain’ the Black Stars will not go and hwie in Egypt because that might cost more than you would’ve gained from a fantastic