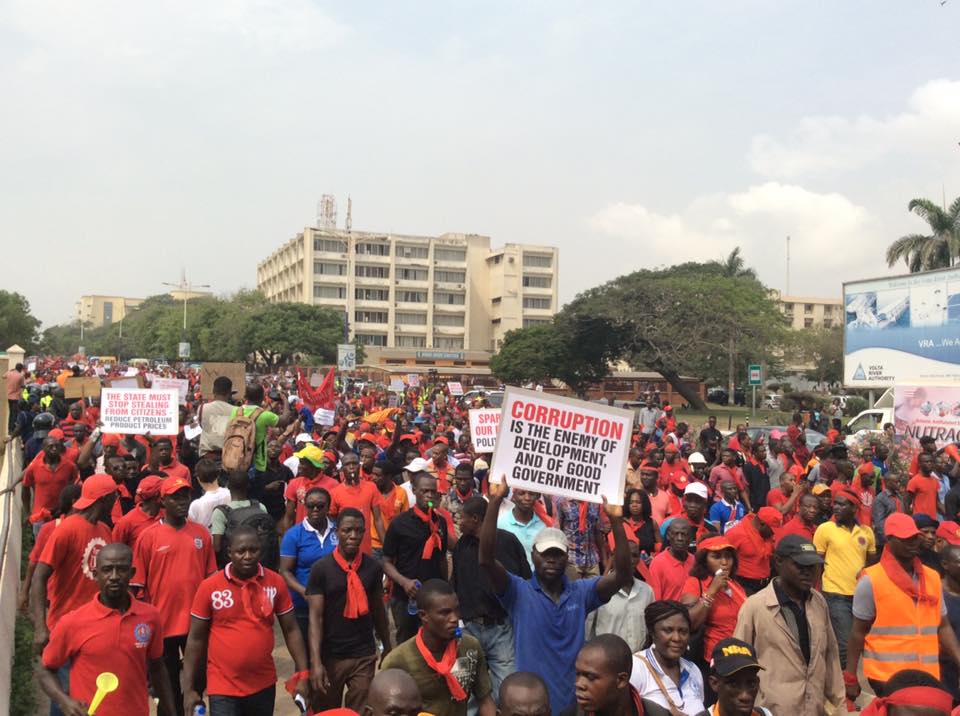 Each time any group in Ghana protests against a government decision or policy, my heart swells with all kinds of joy. When they take to the streets to express their displeasure my pride soars for many reasons. We are not a people used to protesting – the military governments beat it out of our parents and grandparents.

Protests like today’s Organised Labour’s demonstration show we can put aside all our differences including the divisive politics and unite to push for change. It shows what is possible when citizens engage and agree that they deserve better.

These are difficult times to be a Ghanaian. Contrary to government’s propaganda, our lives haven’t changed neither has our country been transformed. Things are horribly bad. Healthcare, education and social services are completely broken. Citizens are now mini local government offices providing their own clean water, power, education and other services.

Thanks to the recent increase in taxes and utility tariffs, the cost of living has shot up to shockingly high levels. Before that was the four-year long energy crisis which, even though seems to have eased, slowed economic growth and killed thousands of jobs and businesses. Life has always been hard in Ghana but never have we seen so much pain due to a government’s incompetence.

Having increased the price of petroleum products by nearly 30 percent and utility tariffs by almost 70 percent, the government then introduced taxes that analysts have described as anti-poor, anti-middleclass and anti-business. Business owners now have to pay, 7.5 Withholding tax, 17.5 VAT in addition to statutory payments and utility and transportation costs.

We’ve tried everything to get the government to take notice of the pain these ill-conceived and very bad economic and social policies are causing. But President John Mahama claims he was not “elected to take popular decisions” and that whether we like it or not, we must tighten our belts.

When asked about taxes, he said: “It’s not every decision that will be popular but what was I elected for as president, to take popular decisions? If I took popular decisions for you to be happy with me, this country will be in the ground by now. Do I take pleasure in imposing taxes on people as if you just take a pleasure in doing it, you don’t. But you look at the alternative and the alternative is worse and so you must take decisions that are in the national interest.”

This would be bearable if there was no evidence of waste, corruption and mismanagement within Mahama’s government. GHC 3.8 million was recently spent branding buses when some nurses and teachers had not been paid. The actions of the government are becoming extremely expensive and embarrassing.

We grumbled and even threatened to hit the streets over certain policies and actions. But we never did. And for that and for so long, the government has been going on as if it is accountable only to itself. It decided to host two former Guantanamo detainees without prior notice. Taxes were introduced without a national conversation like we are their subjects.

Organised Labour’s demonstration and subsequent strikes may not move the government to reverse the tax and tariff increases. The workers may not have the energy to push till government backs down. Union leaders may be forced to sabotage the movement.

Whatever happens, I am thrilled by the steps taken so far. The protests are significant because it tells the government “enough is enough.” It tells the gatekeepers of the status quo that we’ll not wait for elections to demand change. It says we will not let them get away with incompetence, corruption and sheer stupidity all the time. It says a day is coming when the protestors will include the neglected farmers from Sefwi, Taxi drivers and traders from our dirty markets.

Judging from the government’s response to our outrage, protests are the single most important means to get them to pay attention. Nothing will be handed to us if we do not protest vociferously and consistently. Slowly but surely, protests will grip the national imagination. Until then labour’s demonstration and strikes will do for now.