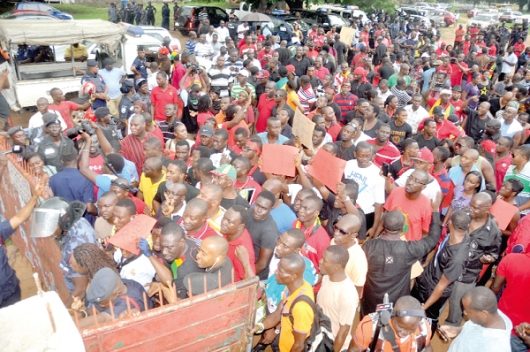 I always knew that the day Ghanaians will take their online activism to the streets, governments and political parties will panic. So when the police spent the whole of last Monday flip-flopping from one position to the other on where protestors could gather, I knew it was out of fear. I also knew that the people who showed up for Occupy Flagstaff House will be mocked, attacked and abused by the government’s rented press. And they haven’t disappointed me.

One presidential advisor described the Occupy Flagstaff House protestors as ignorant. According Michael Kpesah Whyte, protestors wouldn’t have bothered if they had known about the government interventions for some of the issues listed in the petition. Another said all those who protested were members of the opposition New Patriotic Party (NPP). Apparently the said NPP people had lost money in the party’s last campaign hence the decision to protest. The most ridiculous attack is the newspaper stories on some of the women who participated in the protest.

In spite of what government spokespersons say, it is clear government is worried about the impact of the Occupy Flagstaff House protest. They didn’t expect the protest to be a success – not with the police they sent. They know the success of the protest means the Ghanaian middle-class have lost the fear created by the culture of silence. That silence imposed by the founder of the governing party. Government knows that once the middle-class rallies for efficient power supply, a stable economy, improved schools and hospitals, it won’t be long before they get everyone else to demand an end to corruption and waste.

And since government has no plans or means of meeting the list of issues in the petition, it has resorted to attacking and abusing those who participated. It’s an old, overused tactic – employed by both the NDC and NPP whenever they have found themselves in power. Thing is, this time it won’t work. They can dig up all the dirt they have on each person who came out for the demonstration, but it won’t stop the next protest. The insults and the attacks won’t break our resolve. So I suggest government does what it is supposed to, give us the better Ghana it promised. Else we’ll come again until we get them to deliver the country we deserve.

5 thoughts on “Insults and attacks won’t break our resolve”