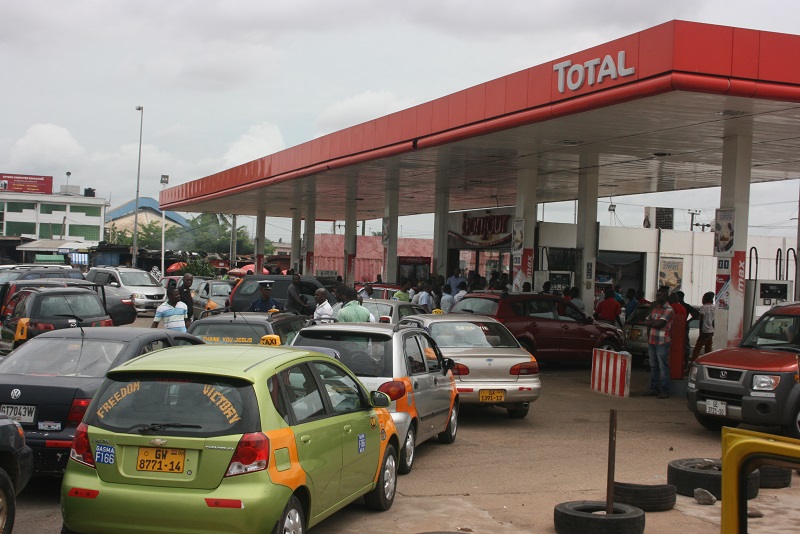 Picture: Ghanaians queuing for fuel in Accra
We say in Kumasi that “agorɔ wɔ ne limit.” It means that whatever game you choose to play has limits beyond which you can’t go. In other words, you have to be wise enough to know when you’ve played enough.
Sometimes John Mahama says and does the darndest things. If we weren’t struggling under the weight of a crumbling economy, we’d laugh along with him. In response to the humiliating elimination of the Black Stars from the World Cup tournament, the president told journalists in Malabo that a committee was needed to investigate the poor performance of the team.
“We need to look at the team as a whole,” he said.
“We need to set up a committee to look at the whole system of what happened in Brazil right from the preparation, through the build up to the World Cup, to when they went to Brazil, to what happened in Brazil until they came back.”
Shortly after making this statement, President Mahama decided to move the current Minister of Youth and Sports, Elvis Afriyie Ankrah to the Office of the President and reassigned Joseph Yamin as Deputy Minister of Sports. Clearly the president doesn’t get it. He doesn’t know he’s reached the limit of incompetence we as a people can take. Yes, indeed, incompetence too has its limits and this government has just about breached that limit.
The decision to form a committee (another one!) to investigate what happened in Brazil, coupled with the reassignment (some would say promotion) of Afriyie-Ankrah and Yamin suggests no one will be punished for the sheer buffoonery of the Ghanaian contingent which has just returned from the World Coup, with these same two men at the helm. It also means that no one would be made to account for all the monies squandered at what was promised to be Ghana’s best showing yet on the global football stage. It is the reward of such bad behaviour and incompetence that has bred such high levels of mistrust that even the Black Stars refused to be convinced by the president’s promise to pay their allowances – until they had seen the cash with their own eyes. Keeping Yamin and Afriyie-Ankrah in government is an insult to Ghanaians. And we will not have it!
We want the two ministers and other officials who were involved in this World Cup fiasco investigated and, possibly, prosecuted. I’m sure the president will like to know if $6000 was spent on each of 500 fans who were sent to Brazil. We saw the pictures and we ain’t sure. We also want to know how much was spent on food, accommodation, and cheerleaders. We want every cedi spent from the money budgeted for the World Cup accounted for. We also want all contracts, including the ones for caterers and cheerleaders, investigated.
The rot at the Youth and Sports Ministry and the Ghana Football Association must end at some point. And I’m hoping President Mahama will go to all ends to prove to all that all his talk about fighting corruption wasn’t just that – talk.
And lastly, I need President Mahama to be presidential enough to apologise for making the proud citizens of Ghana the subject of international ridicule again. That decision to fly three million dollars to Brazil at a time when Ghanaians were queuing for fuel was irresponsible and shameful. So was flouting the government’s own foreign exchange rules. We’ve all had enough. After all, there is a limit to everything, including the humiliation and despair this government is forcing Ghanaians to bear.

‘A Better Ghana’ Yet President travels Abroad For Routine Check-ups