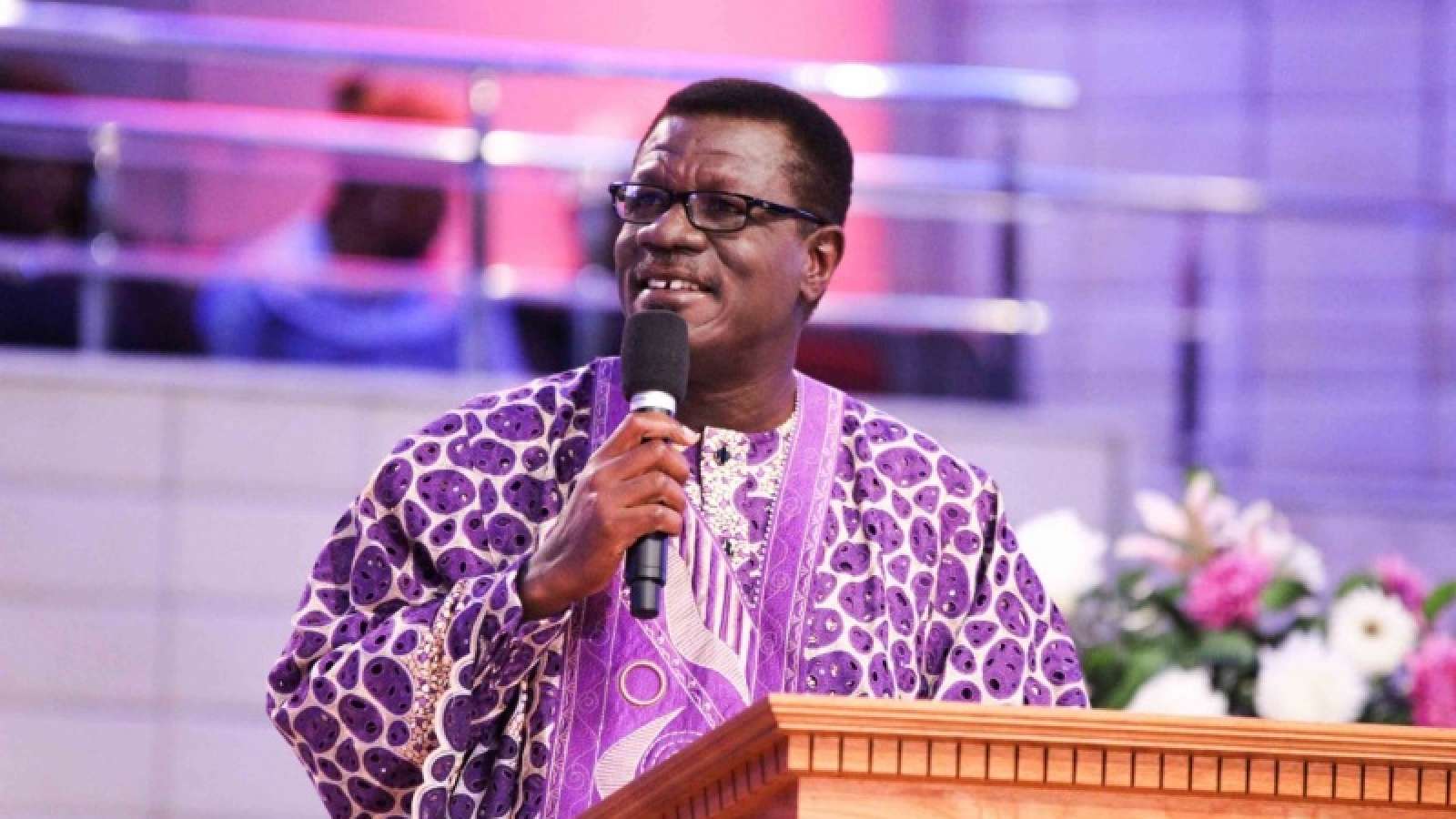 All these years I had been sacrificing to honour my folks and love my neighbour, I wish someone had told me I could have taken a shortcut by lying, cheating and stealing to make $5,000 and pay for blessings. This is basically the sum of the argument of the folks fiercely defending what I have decided to call the Otabil debacle. To them and others who believe in the seed-faith doctrine, one can give and compel God to bless them. Easy right, except the Bible, says something entirely different.

Anyway, If we’re honest, no one is genuinely shocked by the menu of miracles. We have seen some version of the blatant merchandizing of the work of the Holy Spirit in many churches across Ghana. Obinim and others have been selling the works of the Holy Spirit in the form of anointing olive oil and gallons of water on national television for years. The shameless exploitation of the people and the Gospel has been going on since the Prosperity Gospel arrived in Ghana.

The honest-to-God truth is, no one was really surprised by last week’s unveiling of a menu of dollar-priced miracles at the International Central Gospel Church’s Greater Works conference. The surprise isn’t because the list had weirdly named and arbitrarily priced miracles like “millionaire status,” which was pegged at $5000, “seed of completion” for $520 and 24-hour miracles for $240. 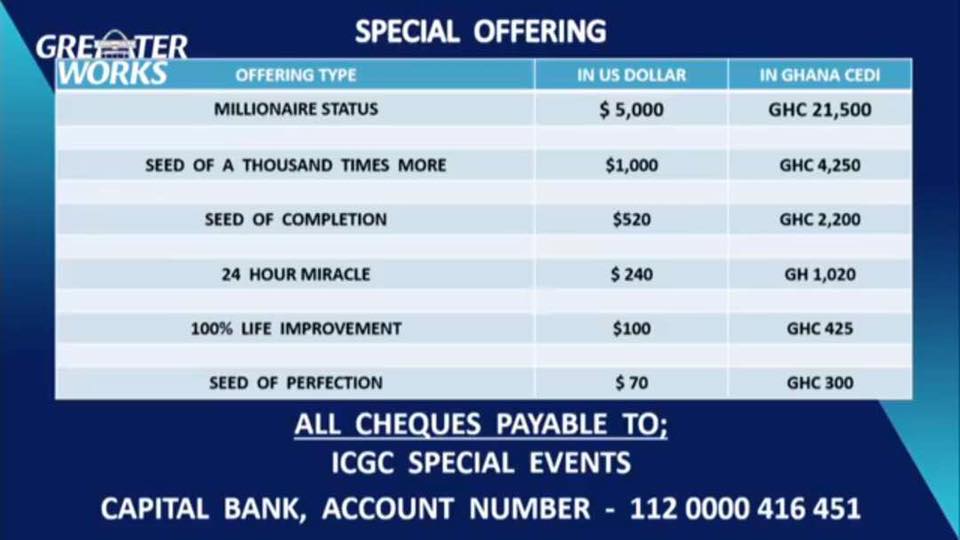 The amazement is because it occurred at the International Central Gospel Church, a church run by one of the nation’s most respected pastors. Pastor Mensa Otabil is a man who has built his brand and ministry by giving Ghanaian Christians practical tools to live godly lives. He doesn’t dabble in the “your-mother-is-behind-your -sickness” kind of theology. He is respectable and seemingly above what educated, and worldly Ghanaians consider as the crassness of Obinim. No one was expecting to ever read that he, too, believed that one could buy “millionaire status” at $5000 or “seed of completion” at $540.

It’s just wrong, and if one wants to stretch it, a con. The menu suggests that God requires our sacrifices to bless us. The one thing that is distinctly clear in the Bible is that God does not need our sacrifices before granting us miracles. Okay, perhaps not that clear from the Old Testament where there were rules on how who and when to give. But the Bible makes it abundantly clear in John 3:16 that “for God so loved the world that he gave his one and only Son, that whosoever believes in him shall not perish, but have eternal life.” After Christ’s death, God stopped dealing with Christians based on the old covenant, also known as the Old Testament. We’re now living under the grace.

There is no argument about the salvation and the blessings therein for us, the Bible makes it clear that by accepting Jesus Christ as our Lord and saviour, he will bless us. And as the Apostle Paul noted in Ephesians 1:3, God’s blessings are all-encompassing: “Praise be to the God and Father of our Lord Jesus Christ, who has blessed us in the heavenly realms with every spiritual blessing in Christ.” Ergo, financial, spiritual, health and material well-being are taken care of like believers. Romans 11:29 makes it clear “for the gifts, and the calling of God are irrevocable.”

Contrary to the arguments being manufactured to defend this ginormous faux pas, and I’m being generous here, there is no ethical, moral, spiritual and biblical justification for this tacky, expensive miracle menu. No Christian worth the blood of the lamb should be caught defending something so gross. Nowhere in the Bible is there proof that the Holy Spirit can be summoned and ordered to produce miracles at will. God will cease to be immutable if we, mere mortals, can compel him to produce a 24-hour miracle at $240. If he is easy to bribe, what would be the essence in fearing his wrath?

For the record, the problem here isn’t the act of giving, which is one of the core principles of Christianity. We’re not just to give, we’re mandated to give, but freely. The act of giving to support the ministry is a long-held practice in the Ghanaian community of churches. It is the contribution of church members that built schools, hospitals and orphanages and sustain pastors across the country. Ghanaian Christians have been supporting the church since the colonialists arrived with the Bible. Even unbelievers know it is good and worthy to give, how much more those of us saved by Jesus Christ.

The problem is the suggestion that one can buy financial and spiritual blessings at special rates in dollars. No amount of dollars can make you a millionaire if you do not get off your bed and work. Again, the Bible is definite on this: 2 Thessalonians 3:10 “For even when we were with you, this we commanded you: that if any would not work, neither should he eat.” It’s that simple. There is no evidence in the Bible of a correlation between one’s generosity and the blessings of God. Everything is free, heck, we didn’t even pay to have Christ die for our sins, how much more simple things like financial and material wealth (which by the way shouldn’t be the focus of good Christians)

If we’re to listen to those fervently defending ‘Otabil mess,’ there is absolutely nothing wrong with the merchandising of miracles in church. The same thing that caused Jesus to sweep through the temple with a whip. But this is Ghana, where men of God are highly esteemed over the God they serve, some Christians have been straining to defend the mess. Suddenly, that which is wrong and evil when done by Obinim is suddenly defensible because Pastor Otabil is involved. Let me be clear, the Obinim comparison is only in the light of selling miracles, not the other crazy things.

The argument that “faith defies logic,” while true, doesn’t apply here because Jesus didn’t charge per piece when he fed the five thousand with two loaves of bread and fishes. The seed-faith theory doesn’t hold either, because the seed as by Jesus and the disciples was a metaphor for the word of God. While I love the notion that folks can do what they want with their money (because that’s what feminists and gay rights advocates have been saying since the beginning of time about people’s sexuality), these pay-as-you-go rates are just indefensible.

It is heartbreaking Pastor Mensa Otabil allowed this to happen on his platform and sought to justify it when the story broke. It is the sort of thing one expects callow and unread preachers to do, not someone in his position who cares about the implications of corruption on national development. Where does he think poor church members will be getting money to buy these miracles? His actions justify that of the condemnable acts of preachers who do this regularly and teach young preachers that it is alright to sell the blessings of God. It also blatantly excludes the poor in the church, the very group Christ loved and cared for. Which makes it even sadder. He can do better.

Come to think of it, $5,000 is not the price of miracles; it’s just the investment you make if you want to become a millionaire here on earth without any work. Seen through that lens, it’s not a bad investment. That is if they can guarantee the returns.