Nyamewaa > Politics - Society > God Will Not Save Accra 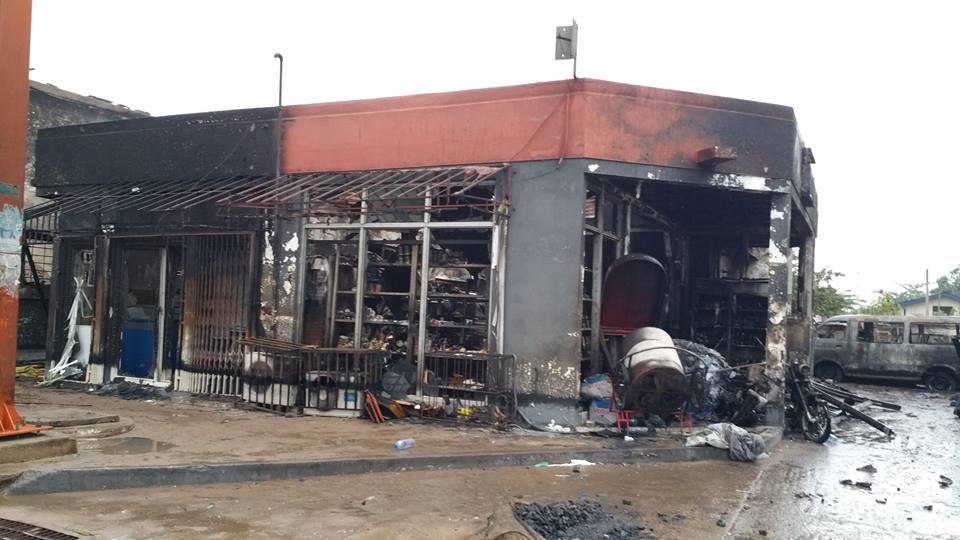 Today marks exactly two weeks since over 200 people were killed in floods that ravaged Accra and a disastrous fire outbreak at a fuel station at the Kwame Nkrumah Circle. Most of the people who died in the fire were seeking shelter at the fuel station during a six-hour downpour which rendered large parts of the city inaccessible. Scores were swept away in the rising flood waters. Hundreds lost everything they own on that day.

In the immediate aftermath of the June 3 flooding, every Ghanaian was affected and afflicted by the awful, awful way these people died. It’s all we have talked about since that horrible Wednesday night. We were concerned and angry about the mess that caused the flooding.

There was what the writer, Nana Awere Damoah calls the ‘official walkabouts.’ Those in government and opposition went on a tour of the affected areas. Officials promised – to do what they promised to do in 2014 to prevent future floods.

President Mahama promised again to take “drastic measures” to avoid a future occurrence.  The government has pledged to release 50 million cedis to help victims and families of the dead.

Two weeks on, Accra is still dirty. The debris from the floods has not been cleared. City authorities have not apologized for the deaths. No one has offered to radically transform the city and to ensure that never again will people die when the rains come.

To make matters worse, the mayor of mayors, collected silt from the Odaw drains and dumped it on its banks, only for it to be pushed back into the sewers by the slight downpour the next day.

On Sunday, June 14, 2015, Accra flooded again. There were no deaths. There were damage and inconvenience. Kasoa and its environs were cut off from the rest of the city. Kwame Nkrumah Circle parts of Osu and Kokomlemle were submerged.

The sad reality is that no one has offered a practical and comprehensive plan with timelines to end the city’s perennial flooding. The Odaw River is still choked. So are all the other receptacles for rainwater in the city.

I’m starting to despair. As usual, we complained, ranted and went back to sleep.  Perhaps it is the shock and the years of neglect, but our anger and disappointment over the deaths have fizzled out. We have returned to our usual ways of dealing with our government’s neglect – our ‘fa ma nyame’ ways. We have handed the deaths to God.

There have not been any protests over the deaths, no show of anger to say we know our compatriots died senseless deaths and we hold those in charge accountable. We have not asked for a concrete plan to make the city safe and livable for all of us either.

Although I do not know my bible so well, I know God doesn’t perform foolish miracles. God will not come and demand accountability for the deaths.  We can pray all want,  the Odaw river will not magically become dredged. No amount of prayers or kindness to the displaced will keep us safe next time.

Accra has been flooding since the 60s. The topography of the area makes it flood prone. So are many cities in the world. In most places, city authorities use innovative tools to manage water and keep residents safe. Not prayers.

If these 200 deaths had happened anywhere else,  the outrage would not have been on social media alone. The public rage would have compelled the government to do more than declare a three-day national mourning period for the dead. The Municipal Chief Executive, Oko Vanderpuije would have resigned or sacked by his bosses.

It’s evident from the government’s deceit with the Conti project that our lives do not matter to them. President Mahama cut the sod for the Conti project in 2014  knowing the money for the project was not ready. The project was supposed to transform the sewage system, get the Odaw River, Korle Lagoon dredged and storm drains and gutters desilted and perhaps, covered to prevent dumping. For three years, we had been told the Conti project would end the perennial flooding of the city.

In the USA, the government’s inept response to Hurricane Katrina led to protests. The head of FEMA, their equivalent of NADMO resigned. In France, the Charle Hedbo killings led to instant protests. We complained bitterly when five African leaders travelled to join the French to protest. The question was “ don’t African lives matter too?”

While it’s all right and kind for the benevolent Ghanaian to donate to the victims, a more useful act would be to demand change in the way things are done in the city.

When Mohammed Bouazizi set himself alight Tunisia, the people in the region seized it to push for change, yes, they provided food for his family but they didn’t go to sleep afterwards!

Let’s not waste this moment.