Home > Politics > The Irritation That Is the Flagstaff House!
Politics 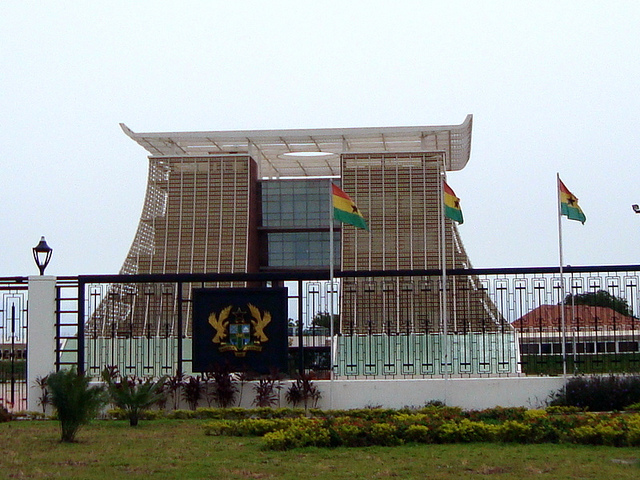 Photo: Flagstaff House (Credit: Google)
We must commend the folks at the Presidency for finding new and improved ways of upsetting Ghanaians.
Right after the GRA/Subah revelations, a presidential staffer told Ghanaians worried about the increased level of corruption within the public service to relax since President Mahama “has been working quietly (in the background) towards managing what clearly is a challenge facing our country.”
The week before that, a minister told those outraged by the increase in utility tariffs to shut up and use candles.Last month, a senior member of government had advised Ghanaians worried about the state of affairs to fetch their passports and leave if they can’t cope.
It seems they have resolved to find new ways of inflicting pain on taxpayers too.  Last week we discovered the Presidency employs over 600 people, some with ludicrous titles indicating they are at the job just for the pay. (Hint: Job for the boys) And just when you think they have run out of ideas, they prove why the Flagstaff House is the place where smart people go to become dumb.
Mr. Vincent Kuagbenu, the former National Service Coordinator was, on Monday, appointed as a presidential staffer whose job will be “to coordinate the rationalization and re-registration of Government vehicles.”  Yes! “… a presidential aide attached to the Office of the Chief of Staff and would work in close collaboration with the Administrator General of the Presidential Estates Unit.”

I’m not kidding and they are not – the grand announcement said “the rationalization and re-registration of Government vehicles was announced in the State of the Nation Address by President John Dramani Mahama in February this year. The exercise which is currently underway is expected to gather steam this month with the assignment of new registration plates to the affected vehicles.”

Mr. Kuagbenu’s position shouldn’t surprise anyone since there were people working at the Presidency as Corporate/ Stakeholder Relations and Citizen Development Officers.  I thought those were the most useless positions ever created by some lazy civil servant but Mr. Kuagbenu’s new position takes the biscuit. Both the job and the title suggest a lack of imagination and thinking that one expects from people working at the Presidency.
The registration and the management of all government vehicles should not result in the creation of a new desk but clearly defined roles for the presidential Estates Unit run by the Civil Service, the State Protocol Unit and the Driver and Vehicle Licensing Authority (DVLA).
At his previous job, Mr. Kuagbenu introduced some innovative ways for graduates to serve the country. The national service farms were expanded and the produce sold to government secondary schools and local communities at affordable prices.  And to some extent, he ended the ‘selective posting’ system where personnel were sent to the best places because their parents could pull some strings.  Surely there are better ways to utilize such a man to the benefit of the nation.
I don’t think Ghanaians have anything for Mr. Kuagbenu -not after that proposal to make graduates work as traffic wardens. But we all agree that a government complaining about a huge wage bill and non-productive public sector shouldn’t create positions where people will be paid for no work done.
And if this one of those jobs created due to pressure from party members on the president, then it is time for the president to reform the public sector and properly decentralize so he doesn’t have to appoint everyone.

No country for some recorded politicians!

Freebies and a failed education system