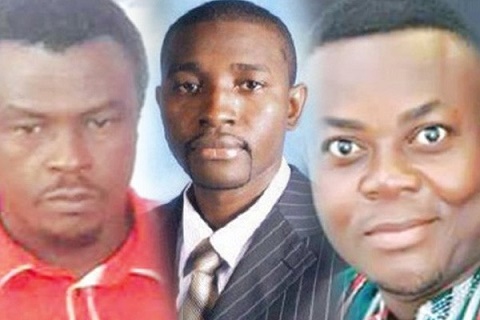 They say when the gods want to destroy you, they first make you partisan. Judging by the reaction of the ministers and supporters of the governing National Democratic Congress(NDC) to the jailing of the Montie Trio, I suspect the gods may have it in for them.

Ministers and supporters are mounting pressure on President John Dramani Mahama to invoke powers under Article 72 of the constitution to pardon the three men who were jailed on contempt charges by the Supreme Court.

‘Mugabe’ is said to be skilled at goading his guests to do and say the unthinkable. It is said that anyone who criticises the president or the governing party is attacked and threatened on the show. It is therefore not surprising that they took their casual abuse of other citizens a notch higher by threatening the lives of judges.
Perhaps it is loyalty to the NDC that has blinded party folks to their appalling behaviour.

If we are honest, four months in a Ghanaian jail for threatening judges with harm is nothing compared to the fate of the many who have been in prison for years after having been rounded up in police swoops. Some petty thieves get 10 years in jail for stealing mobile phones and plantain. Or prisoners who have been on remand for years and years without even knowing when they will be given their constitutionally-defended day in court to decide whether they are innocent or guilty of any crime in the first place. Sentencing was once acknowledged by the Chief Justice as being very harsh on poor people. In all the years that some of these officials agitating for a pardon for a group of thugs have been in office, they have never advocated for fairer sentencing and reform of the justice system.

But I digress.
Threats of death and rape against anyone – not just superior court judges – is a crime under Ghanaian law. Crimes come with specific punishment. Had the state agencies mandated to deal with such offences done their job, the Montie Three would have faced a minimum sentence of three years.

Before the petition, neither the NDC nor any of the ministers condemned the men for their vile comments. Save for that tepid and badly-written statement issued by the BNI, there was no word from the government or any of the agencies mandated to deal with criminal attacks on the judiciary, at the time the tapes became public. The Police, the Bureau of National Investigations and the Attorney General’s office too often seem to look away when foot-soldiers and officials of the governing party step out of line. This left the Supreme Court was with no other option than to tackle the issue itself, but partisan lenses can be so opaque and blinding that NDC executives and government officials are contorting themselves to make it seem like the Supreme Court did something excessive. They are working so hard to portray the three as victims and the sentence as a curtailment of free speech and media.

Even if we believe that a government that once arrested the CEO of a media house over an online story (and a journalist for refusing to disclose their source) cares about freedom of speech, the sentence is not an attack on free speech. It is punishment for criminal intent and conduct.

There is no way to know what the President will do under the circumstances, with people in Cabinet asking him to overrule the court. But going by his track record of reassigning ministers caught in scandals to the Presidency, he might just fall into the trap of the gods and pardon the Three. I hope he does not. Any attempt to interfere with the court’s judgement will undermine its independence and authority, and no Ghanaian would trust and accept the finality of the court’s decisions after that.

All of this is bad for our democracy and stability. The very issue the Montie 3 were talking about in the first place –  the credibility of the voter’s register – is still in contention. Should we end up with another case of alleged vote rigging, who do we plan to consult: our village gods?

Then again, perhaps this is the strategy of the very same gods to take down Mahama and the NDC administration and save us all from further doom.