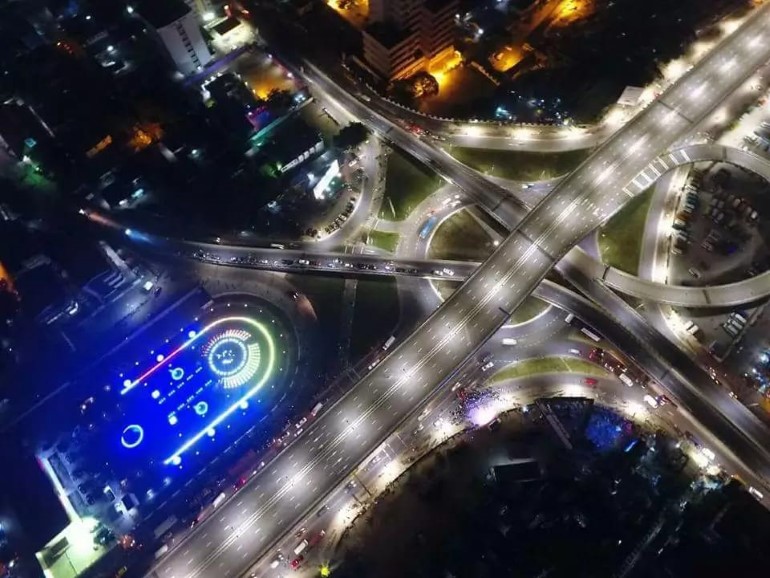 Under bright neon lights and with great fanfare on Monday, President Mahama cut the tape to inaugurate the Kwame Nkrumah Circle interchange. There has been nothing but self-praise from the government and party supporters. The president himself declared the evening “this is a day the Lord has made.” The government has apparently transformed the area into ‘miniature Dubai’ because of a fountain draped in neon. The spin is understandable,  Dubai is the new playground for the president and his friends. Surprised. But the fountain with the neon is ghastly.

It’s campaign season, and parties are seizing every chance to show what they can do. It’s all good except the NDC wants us to believe president Mahama is the ‘infrastructure king’ who we must be thank for new projects. Both the president and his people have been going on and on about how he has done more for Ghana’s infrastructural development than any other leader. They now hold now in the same place as the nation’s first president, Kwame Nkrumah. The president himself has hijacked Nkrumah’s narrative and is now claiming his critics are talking about debts the same way their founding fathers did to Nkrumah.

Both narratives are untrue. His contribution to Ghana’s infrastructural stock cannot compare to Nkrumah’s. Neither is he just being criticised for the cost of these projects for fun or for politics. There are relevant questions about the value of these projects, some of which independent analysts say have been inflated. There are questions about the debt stock and the number of projects undertaken by the government which have not been answered. The NDC has not been able to present an itemised list of projects with cost undertaken over the last eight years. 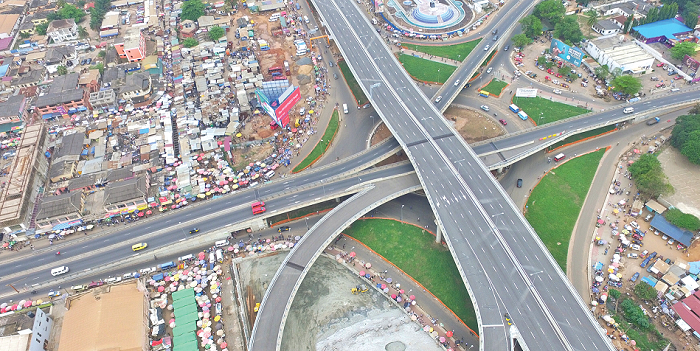 Even if all these questions are answered, these projects alone do not make the president the best we have had. The hospitals, schools, roads and the closed factories are all great. They would improve lives. But they are not huge achievements that we must celebrate the president for. President Mahama has done what he was elected to do – implement policies and build infrastructure that to improve our lives. Since the foundation of Ghana, all presidents have added to the nation’s infrastructure stock. Even some of the aimless military leaders. That is what the writer Nana Awere Damoah meant when he said: “Rome was built every day.”

That the Nkrumah Circle interchange is an improvement on existing ones is correct. That it will ease congestion and enhance vehicular movements to many parts of Accra is also true. If for nothing at all, we no longer have to spend hours idling in the chaos that used to be Circle. And for that, commendations to President Mahama and his team for the initiative and for ensuring the completion of the project. 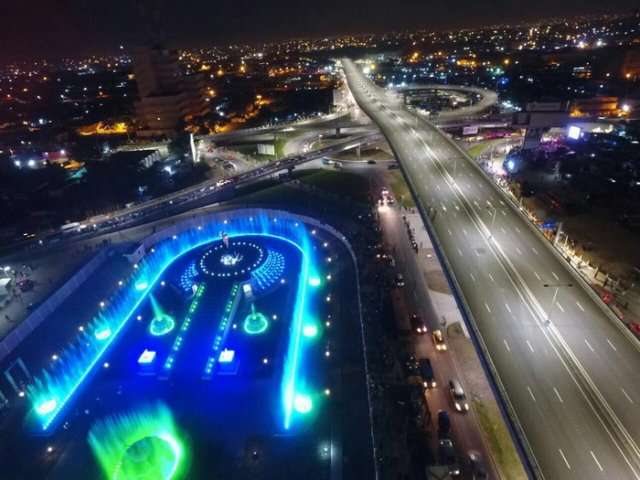 This was one of the National Democratic Congress government’s much-vaunted projects. They have been going on and on about it since they rushed to open some lanes ahead of completion. Perhaps they did not think they could complete their much-touted tourist site ahead of the elections. How were they going to justify the debts they have racked up? Mercifully, neither the chaos in the Brazilian government nor the Queiroz Galvao corruption scandal impeded the progress of the project. We now have an interchange with three flyovers and added facilities. It is just okay.

But it is is not historic. It is not a magnificent engineering feat. The fountain is ugly and misplaced. It’s facile to imply that an interchange with blings in the middle of the filth and chaos will transform the area into a tourist site.  The road will not make any impact on the lives of men and women hawking things from China.  And this is not enough to merit our praise or votes.

Enough of the noise about what a great and kind leader we have had who has generously built us an interchange. President Mahama did not pay for this project out of his pocket. We, the people would have to pay the Brazilians back for the loan the government took for this project. This goes for other projects too.

It has become the habit of the two main political parties to campaign with infrastructure but as the wise man once said “if you vote for someone because of schools, hospitals, roads, and interchanges, you have a weak mind. Because it is government’s responsibility.”