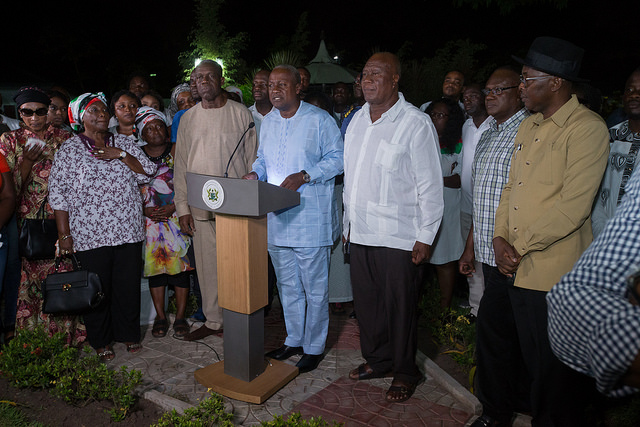 Oh, what joy! The day I feared may never come in 2016 came on December 7th, when Ghanaians voted massively to kick President John Dramani Mahama and his governing National Democratic Congress out of office. This was my prayer on January 6, 2016. It was my fervent prayer that we could get rid of him for his many sins.

And praise is to all our ancestors for rescuing us from the clutches of this self-serving, corrupt and incompetent lot. I’m going to pour libation to thank the ancestors for this humiliating defeat of John Mahama. He spent his four years embarrassing me and all right-thinking members of our nation at every turn. I feel nothing but joy and pride that he lost.

To say he lost is to underestimate the extent of his trouncing. He and his people said the polls would be an endorsement of his governance. But the good lord knows, we ain’t that stupid. We went into the voting booths and remembered all the pain the Mahama government wreaked on us with glee. We didn’t forget about the corruption, and the high cost of living like the President said we would. We didn’t forget the filth in our towns and cities and the high levels of unemployment like they hoped.

This rejection of President John Mahama and his NDC has restored my faith in Ghanaians. This loss will forever be the example history teachers will give when they talk about a president who wasted all the chances to be great. The NDC’s massive defeat shows that we may tolerate an incompetent government, but we’ll punish them at the right time. And punish John Mahama, we have.

Honestly, a part of me bled watching him deliver his concession speech. I have never seen him look so broken and shocked. Suddenly he appeared to want the job he spent the last four years trivialising. When the economy which was growing at 14 percent in 2011 started tumbling in 2013, he insisted “our economic fundamentals remain strong, and our mid-term prospects are good.” Ghana’s economy is now estimated to grow a measly 4 percent in 2016.

When we said times were hard during the peak of dumsor and the depreciation of the cedi, President Mahama went to Parliament to blame us for “insatiable appetite for foreign goods.” When we complained about the government’s borrowing rate, he told us he didn’t borrow to “buy the kebab.”

When we complained about the embarrassment our government caused us by airlifting over 4 million dollars to Brazil for the Black Stars, they defended the act. And the punishment for Elvis Afriyie Ankrah, the Sports Minister who presided over the World Cup mess was a mere reassignment to the presidency. Reassigning officials and appointees caught in scandals were President Mahama’s punishment of choice. Nothing happened to even those who connived with others to rob the state.

Interestingly, President John Mahama was supposed to be ‘it’. He was the youthful president who was going to take us to closer to the promised land – reduce poverty and corruption and build the needed systems to transform the way we live. He was the one who would top what former President John Agyekum Kufuor did in his eight years. He was young and savvy to provide the leadership that could renew the economy and generate jobs.

John Mahama was young but old and experienced enough to fix the flaws in Ghana’s democratic systems. Where the late John Atta Mills had failed, many including me, believed that this young fifty-something-year-old might outdo and outshine his former boss and others before him.

Regrettably, that was not to be. The Mahama government staggered from scandal to scandal. Nothing was done about the GYEEDA, SADA, Subah, the bus branding and other shocking scandals. Instead, President Mahama went to Parliament to make cracks about who said ‘tweaa.’

He did not rebuild broken systems but undermined state agencies like Public Interest Accounts Committee (PIAC), the Commission for Human Rights and Administrative Justice (CHRAJ) and the Judiciary by starving them of resources while oil blocks were sold like tomatoes on the black market. To crown his disruptive and destructive efforts, the president freed the Montie 3 – three men who publicly threatened judges with death and rape who had been jailed for contempt by the Supreme Court.

They say “if you want to test a man’s character, give him power.” For me, the president’s decision to yield to pressure from his ministers and party members to free the Montie Three was a failure of character and leadership. It was the final knell to show he doesn’t care about Ghana.

In his concession speech, President Mahama said “It has been without a doubt, one of the most tremendous privileges of my life to serve this great nation as President and to work on behalf of all Ghanaians. I will leave it to history to be the judge of my time and contributions while in that highest office.” First, what is this privilege he speaks of? Was he not the one strutting around like we were his subjects? Also, unless the people coming after him fail to learn from his fall, history won’t be kind to him. He failed! And I’m sure no one is sorry to see him go.