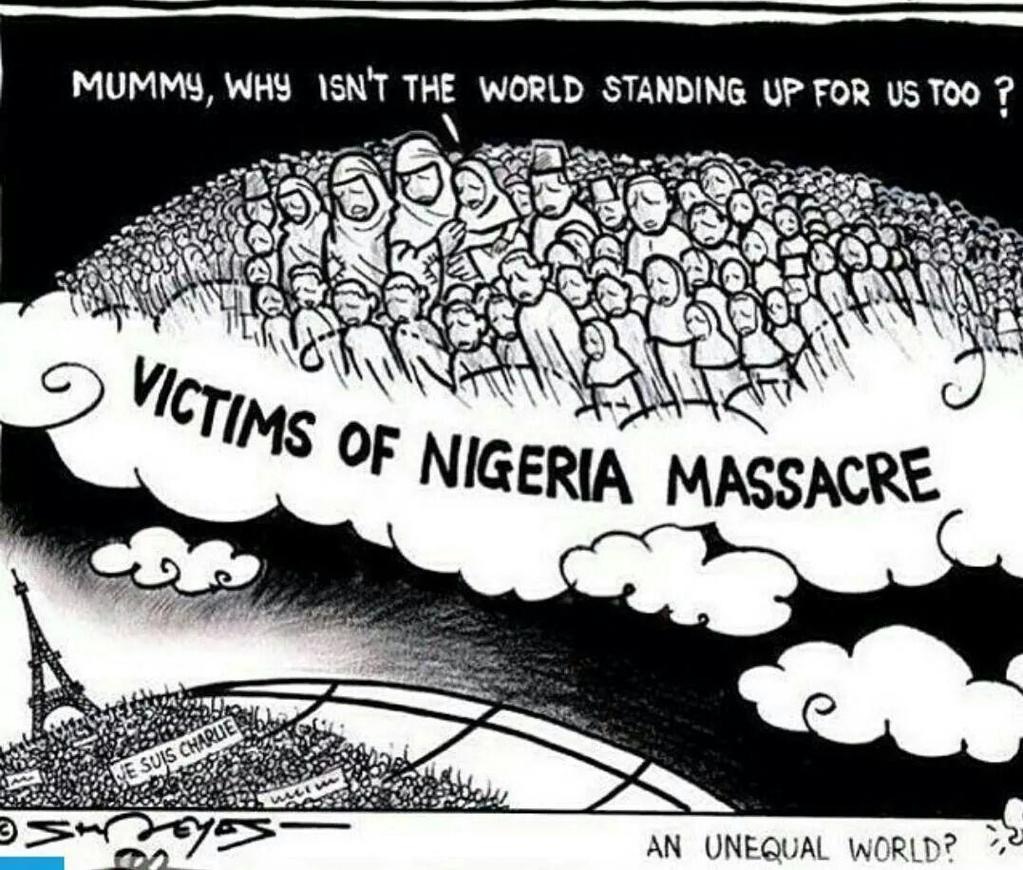 Boko Haram killings: Can Ghanaians ‘cry your own cry’

Ghanaians were very clear about the Charlie Hedbo killings.  The Paris deaths were condemnable. There was, however, outrage when 40 world leaders (including some African leaders) descended on Paris to mourn with the French over the Charlie Hebdo deaths. They, like most Africans, were surprised by the massive show of support France had received three days after the incident.

Nothing like that happened in Nigeria when the Chibok girls were taken, someone said on Twitter. Others were angry about the silence of the Western media on the Baga killings. Boko Haram had reportedly slaughtered over 2000 people in the town of Baga two days before the madness ensued in Paris.  They said the leaders of the western world had neglected Africa by going to France.

Usually, we get it right about the Western world. They came to colonize, loot and they left our continent mired in poverty and wars. This was after they had taken millions away as slaves. Their media tell skewed stories about us. They never consider the interest of Africans in signing trade contracts with our governments.  The evidence shows that they stopped caring when they left (but we are not entirely sure they ever did).

However, we cannot accuse the West of neglect because of the Baga deaths. Western governments acted quickly on the Boko Haram crisis in Nigeria.  Countries like America sent over a special military team with tons of cash and equipment to help the Nigerian military find the Chibok girls. ECOWAS whose members live in the neighborhood only issued a statement.

At the time of the Paris march, the Goodluck Jonathan government was still contesting the number of people massacred in Baga. The Nigerian army said the deaths in Baga had vindicated them. It is evident that Boko Haram was the more murderous side.

With elections weeks away, and the government campaigning for a second term, Nigerians couldn’t do much save for venting on social media. The rest of Africa directly joined with hashtags such #IamBaga and #JeSuisBaga and moved on. The rage over the West’s handling of the Paris killings, however still persists. People are still asking when the world will stand up for Nigeria on social media.

I am embarrassed to admit, but I watched the events in Paris with awe and envy. The show of effective leadership of the French Police and the government during the chase for the killers and the spontaneous rallies by citizens were inspiring.

A terrible thing happened in France. Europe rallied. Citizens of other European countries traveled to France to express their outrage over the deaths. It was beautiful. There was something defiant about that rally.  It was clear to me the French, and their European supporters were offended by the killings.

It is hard for me to understand the outrage of Africans over this matter. 17 people were killed, and three million people showed up on the streets to express their anger. By marching, the French people were saying ‘we won’t have anyone silence us.’ They were offended by the killings, and they couldn’t wait for the phone-in segment of their favorite morning show to rant.

They hit the streets. Why are we over here criticizing them for that?

The truth is the West hasn’t neglected us.  Our leaders ignore us every day, and we let them. It is not the Western leaders who should march for us – we elected people here for situations like that.

The difference is that over here, no one has taken offense at anything. Nothing gets us angry. We’ve become used to bad governance, rising poverty levels, poor infrastructure, lack of access to water, housing and corruption. We are divided along ethnic, partisan and religious lines to care about the carnage on our roads.

It is even odder for Ghanaians to be hurt by the supposed neglect of Western governments for African lives.

Baga is too far.

In Ghana over 2000 died from road traffic accidents while 11, 328 were injured in 2014.  On Saturday, January 15, an articulated truck rammed into the car of a 30-year-old banker on the Graphic road sending him into a coma and subsequently killing him. The traffic lights at that intersection were not working.

This is no way for anyone to leave God’s earth.  Sadly, it is eerily a standard route for many in Ghana. Hospitals in cities routinely turn emergency cases away because they have no beds. Pregnant women give birth on bare floors, all over the country.

No one has walked into any building to kill people, but we are dying avoidable deaths.

Everywhere else, these numbers would have alarmed citizens.  Their anger over the needless death of the banker and hundred others would have forced the government to implement its road safety plan and enforce laws.

But this has become totally acceptable to us. No one will march for the people who died needless deaths in 2014 or those who died this year. Some will rant about the state of our roads, hospitals, schools and that will be it. Others have checked out of Ghana – they may live here, but they’ve cushioned themselves from the ills of the nation.

Their children don’t attend school here, they have 4-wheel drives for the horrible roads and insurance schemes that give them a chance to be airlifted to India or South Africa in case of an emergency.

We need to be more alert to inhumane treatments at home so we can truly grieve with Nigerians and citizens of other African countries when it matters. .