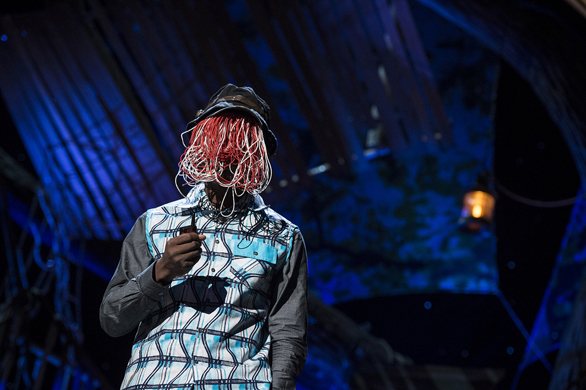 And so it came to pass, Anas Aremeyaw Anas publicly screened his latest expose on judicial corruption on Tuesday. Despite threats of court injunctions, hundreds of Ghanaians turned up at the Conference centre to watch the documentary on judicial corruption. It was painful to sit and watch all three hours of it. And it’s not because it was long or the air conditions in the auditorium were not working. The behavior of the judges and court officials caught on camera was sickening. The way clerks, interpreters and judges met and negotiated bribes made me physically sick. I have seen many documentaries by Anas, none were as nauseating as this one. Some of the judges took as little as 500 cedis to throw cases. The documentary raises so many questions. Here are my takeaways from the documentary.

Ghana’s judiciary is in tatters

Prior to this, a number of surveys had revealed that the judiciary was perceived as corrupt. Forget what you were told when the reports from the Afrobaromter and the Ghana Integrity Initiative were published – the corruption within the judiciary is real. Our judiciary, the third arm of government is beyond the broken. That people appointed to uphold the law and the rights of citizens violate it without consequence. None of the over 30 judges and 100 court officials had to be coerced. Anas and his Tigereye just had to find a facilitator and that was it. Murderers, armed robbers, rapists and other criminals were freed for as little GHC500 in some cases. The system works in favor of the highest bidder.

I’m not buying the entrapment argument. I don’t believe the judges and court officials took their first bribes from Anas. It did not look like it was their first time on camera either. That means they’ve have been retailing injustice for however long they have been on the bench. That none of the 34 judges came to the attention of their bosses is unbelievable. Is it that no one reported them?

Even if the corruption of the judges was hard to spot, how about the court officials implicated in the scandal? How come no one in the system blew the whistle? What about the suspicious rulings? Because to be honest, some of the judgements stunk! Is it that no one was reviewing the judgments of the judges? No one noticed the noxious trend?  (*Shudders*)

Like many other systems in our country, the judiciary seems to be on auto pilot.
There are no supervisors. Some of the supervisors are also too corrupt to point fingers. The system stinks. Some of the bribes were taken under the nose of the Chief Justice, the Bar, the General legal Council and the Judicial Council. Has the judicial process ever been reviewed besides increasing filing fees?

Judges have no sense of propriety

Seriously, I can’t even count the number of potbellied men who received the team half-dressed at their homes. Nearly everyone was in boxers or bare chested when the team called with goats, yams and cash. That is not the worst part, isn’t there some sort of law that requires judges to meet parties involved in the case with their lawyers present?
Are they not supposed to uphold the rights of all citizens? Their residential addresses are sealed to prevent people involved in cases going to their homes to influence them. Even in their chambers, lawyers must be present when they meet litigating parties. But most of the judges just allowed people they don’t know to walk in with the goats and yams.

All it took for one court clerk to grant Anas’s people access to a judge was GHC40. The judge himself took GHC800 to free a man who defiled a 13-year-old. There was talk about the victim or even conditions for the accused when released. Six armed robbers, one of whom had confessed to the robbery were freed for as low as 2,500 cedis.

Judges and officials will go any distance for bribes

The recklessness displayed by some of the judges in the documentary is shocking. One met the group at the mall for the rest of the money agreed on. He drove himself after allowing them to come to his house with a goat and cash. Another met in a carpentry shop. Some of the court officials took their bribes right under the sign at the court premises that says; “justice is not for sale.” What my untrained mind knows is that judges must always meet all parties with their lawyers, but none of the judges exercised this caution.
The corruption chain is entrenched and pervasive

It is an interesting web of people willing to break the laws they’re supposed to uphold at the right price. In this chain, there are drivers of judges, court clerks, police, prosecutors, court registrars, interpreters and the judges who are the last to be seen. The Tigereye team just had to find the right person for right judge and the deed was done. Justice Ajet Nassam’s clerk, King George, Dzata and the Major guy seem to be well-established players who know which palm to grease and where. From Bolgatanga through Juaben to Accra, there was always a well-connected court official who worked as a fixer for the judges and users of the court – the reason no one blew the whistle on any of the people caught in this scandal.

It’s no justification, but why are people using paper for every procedure in the court? Some of the courtrooms, buildings and the living quarters of the judges could compare to a shack in a slum. Why won’t people working in these horrible, unsafe and often dilapidated spaces be corrupt? The neglect is a sign government doesn’t care about justice delivery.

There are honest judges

What is reassuring is that, out of rotten lot, there were some judges that threatened Anas’s people with arrest for coming to their homes. Others outrightly rejected his gifts. But I wonder why they did not alert the authorities about these attempts. Looks like offers are made daily and people know which judges to see on the side.

Everything rests with the judge – the rights of both the accused and victims, plaintiffs and defendants. Of course, they are supposed to be guided by the evidence, rules and regulation and the law. But again, i’m wondering if it isn’t time to review this system. The Anas documentary shows the rights of citizens are abused depending on which side has more.

Finally….
Although it looks really bad, this might be our best chance to radically reform the judicial service. This opportunity cannot be wasted because further drop in the public’s trust in the system