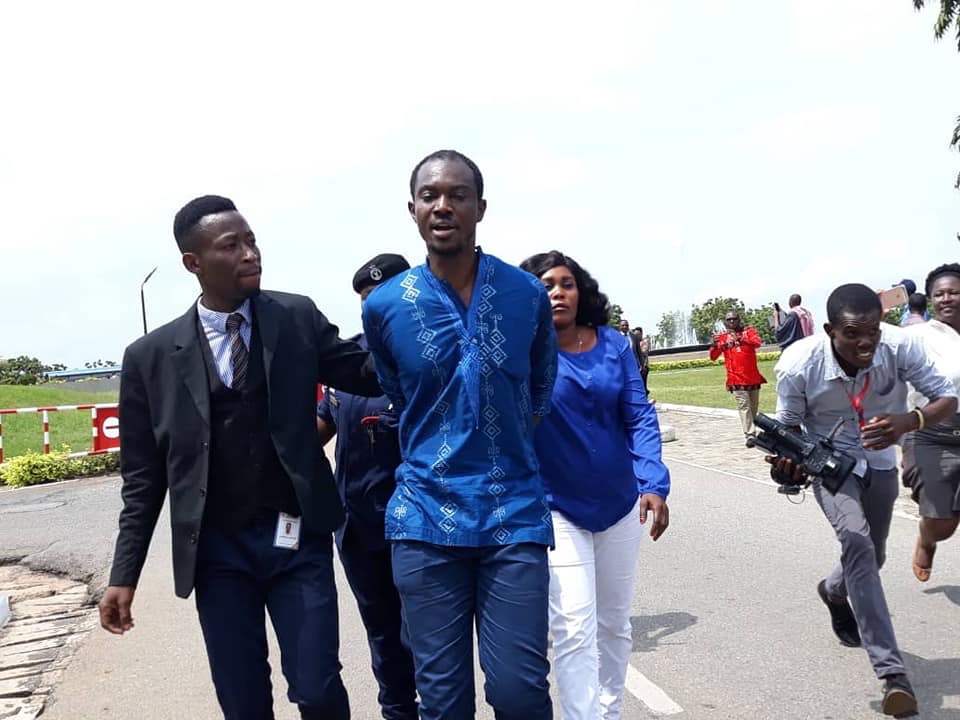 Ernesto Yeboah being taken away by Parliament's security personnel
Politics

For so long MPs have taken us, the people who elect them, for granted. They come to Accra with the promise to work with the government of the day to improve our communities and lives. We give them everything to make this possible–car loans, rent-free accommodation, immense power and privileges. But once they get here, they pass bills and laws and approve agreements without consulting their constituents. They put their party and collective interests above ours and the country.

It was time someone told them that enough was enough. Despite public anger over the decision to build a new chamber, MPs debated the issue as though we were insane to be offended that MPs from constituencies without basic amenities had earmarked $200 million to build a multipurpose Parliament. During that debate, the MP for Adansi-Asokwa, KT Hammond, said: “MPs cannot sit under trees,” to which Ernesto Yeboah replied, ”Drop that chamber.” Hammond’s comments reflect the deep lack of respect MPs have for the people who elect them. It is as insulting as the decision to build the chamber.
But it was Ernesto Yeboah who got berated for protesting. Aside from being dragged and cuffed by security personnel, much has been made about the nature of the protest. Why did he “disrupt the business of the Parliament?” Some, including a veteran journalist, have said Ernesto Yeboah should have sought permission before staging the protest.

Others have said protesters must be peaceful and operate within the law, basically, “do not disrupt Parliament.” These questions will not surprise Ghanaian feminists who often get asked similar questions.  Why are we so angry? Why can’t we make our demands nicely?
These questions arise out of a complete lack of understanding of direction modes of resistance which includes civil disobedience and boycotts. Citizens have a moral responsibility to challenge unjust laws and policies. Ernesto Yeboah was exercising this right and the right to free speech when he yelled at MPs in Parliament. He was using that moment to express his outrage over their decision to spend millions on a new building when thousands of children study under trees all over Ghana. Protests are messy, sometimes peaceful, often impolite and disruptive, but they matter and are necessary.

It’s one of the many ways citizens can participate in the decision-making process.
Often when a terrible thing happens in Ghana, say, when a government make an idiotic decision or Parliament plots to waste our, we (citizens) ask, “What can we do to get justice? How we can we force the government to do better?” We rage and rage and wait until the next election. We seldom protest, refuse to comply with laws or resist projects. But we covet other people’s protests and social justice movements.

Our recent history and the government’s response to protests affirms this. Adenta residents finally got the government to install footbridges on the highway after that massive instant protest. There had been numerous petitions and news reports before the 110 people died at that spot, but they only acted when residents staged protests.  Ghana’s political class have shown in countless ways that they will not build this nation if we don’t make them.
They say they have dropped chamber from their “present agenda” but they’ve started a campaign to convince.

It’s obvious this plan is not dead yet. We should be ready to quash it once and for all. To do this and more, we will have to organise differently. We will have to learn to seize moments like Ernesto Yeboah’s to keep the pressure alive. We failed when we took parliament’s statement at face value and called off the planned protest. It was a ploy to drain the public anger. We have handed them victory by failing to protest.

Dear Nana Addo: Here are your secrets to success

Time to hide your money: John Mahama is desperate

GYEEDA Rot: Are Some Thieves Guiltier than Others?